These are the calamities that could befall cannabis users – according to anti-marijuana propaganda in the early 20th Century.

As the month of 4/20 comes to an end, shocking anti-marijuana adverts have surfaced with their zany claims of what can happen to weed smokers.

The 4/20 movement is synonymous with cannabis culture and the month of April. 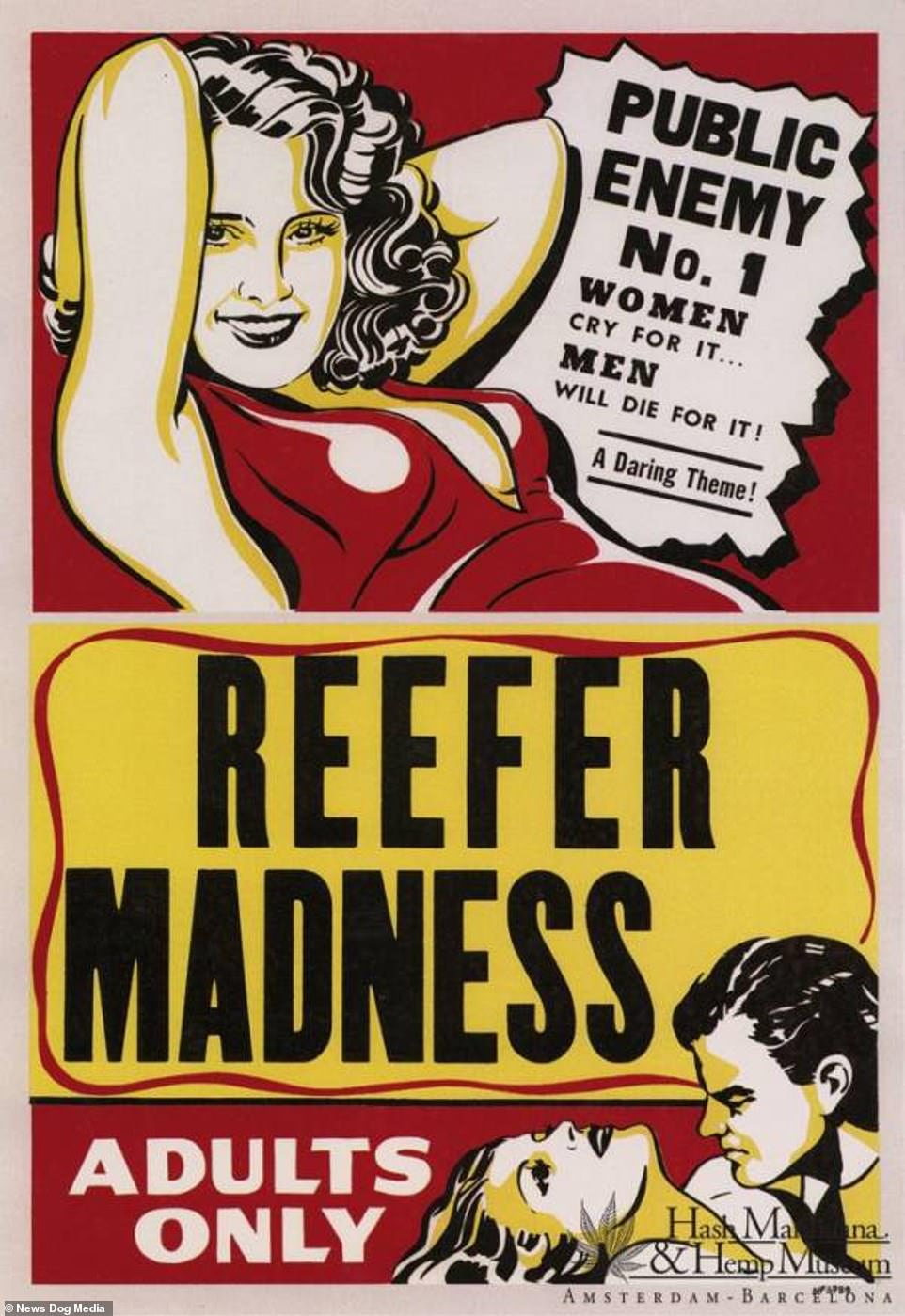 Throughout the Reefer Madness campaign, women are often depicted as victims or purveyors of the drug, as good girls who are vulnerable, or bad girls who push it on others 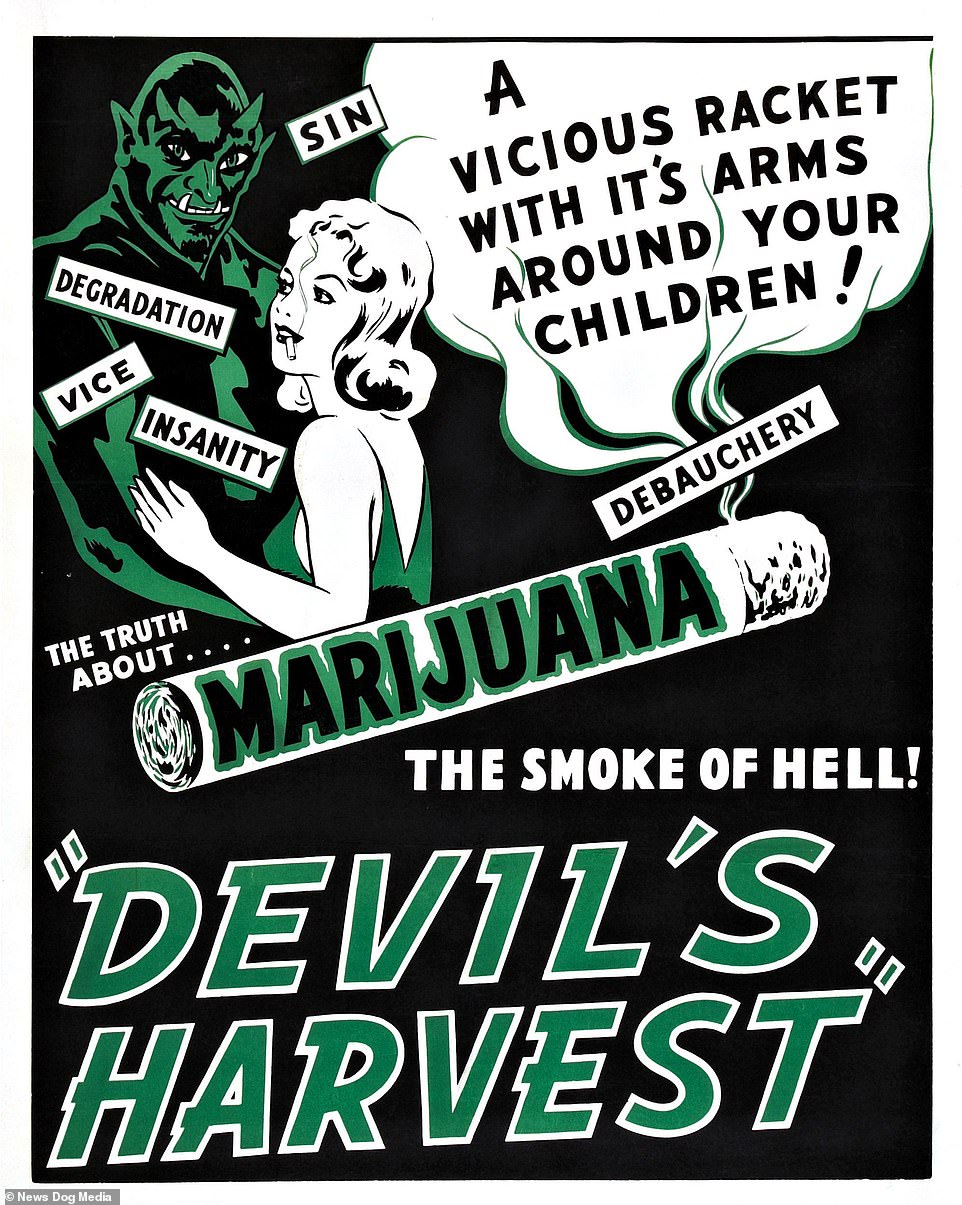 ‘Devil’s Harvest’ – the smoke of Hell – this poster states that cannabis is ‘a vicious racket with its arms around your children’, with the devil in green 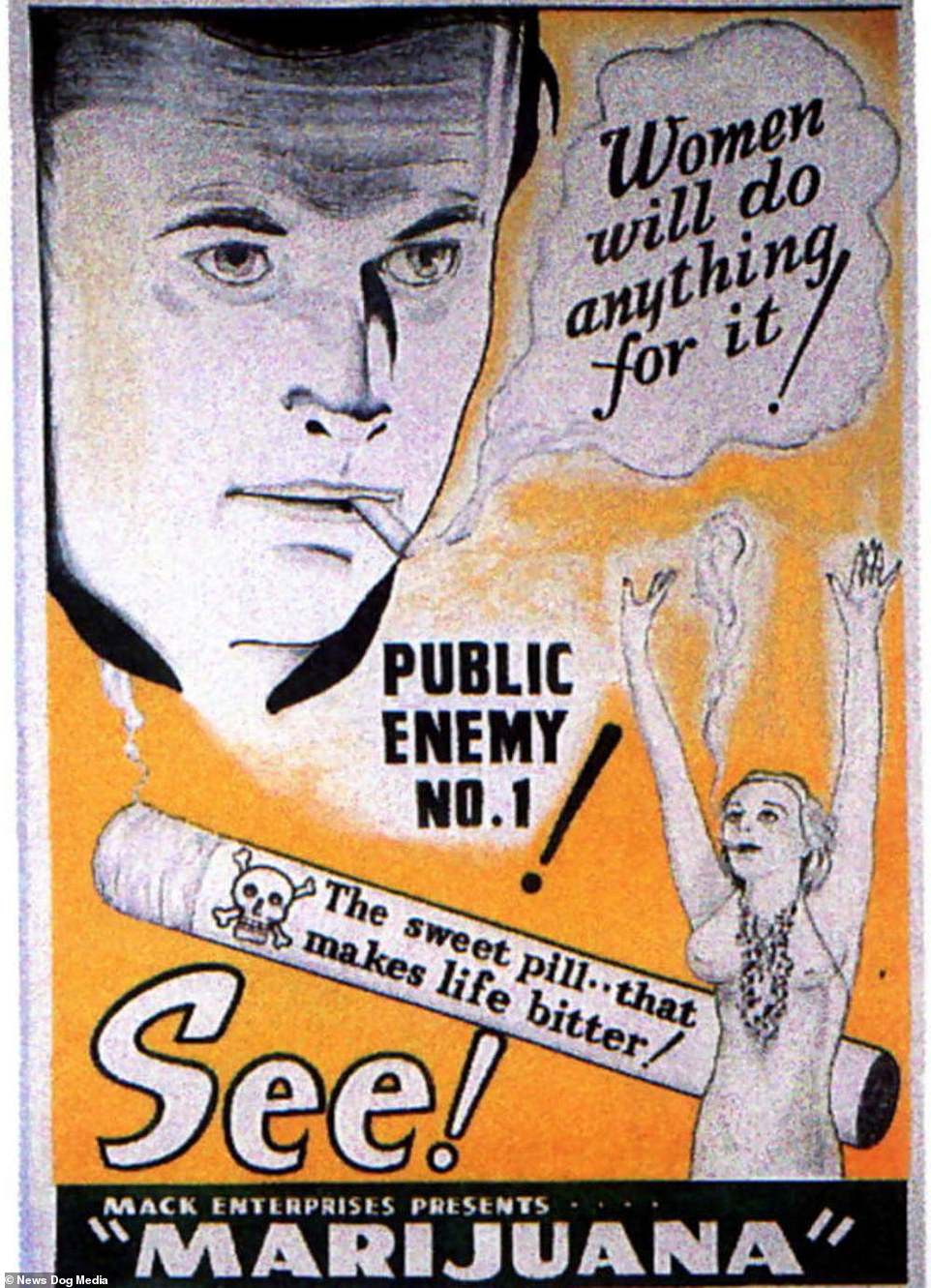 Public Enemy No.1 – Marijuana – this orange-colored poster is fairly typical of the whole campaign, claiming women will do ‘anything’ for marijuana and putting them in next to nothing 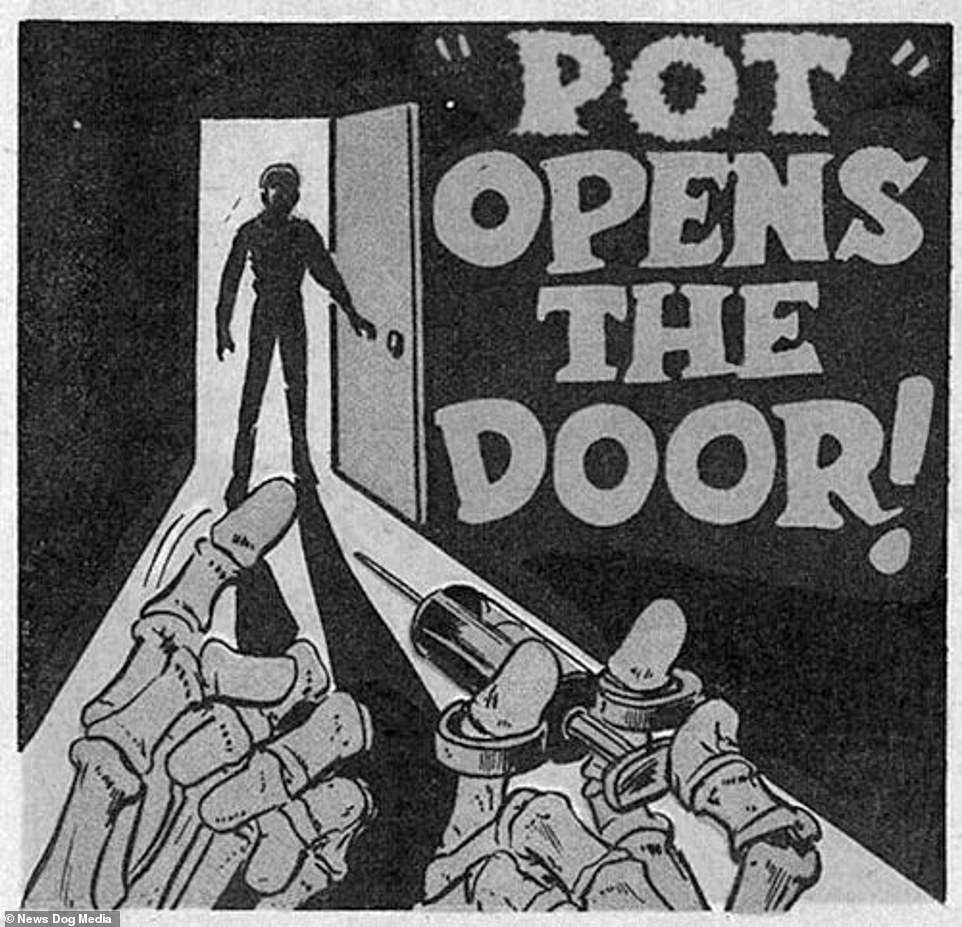 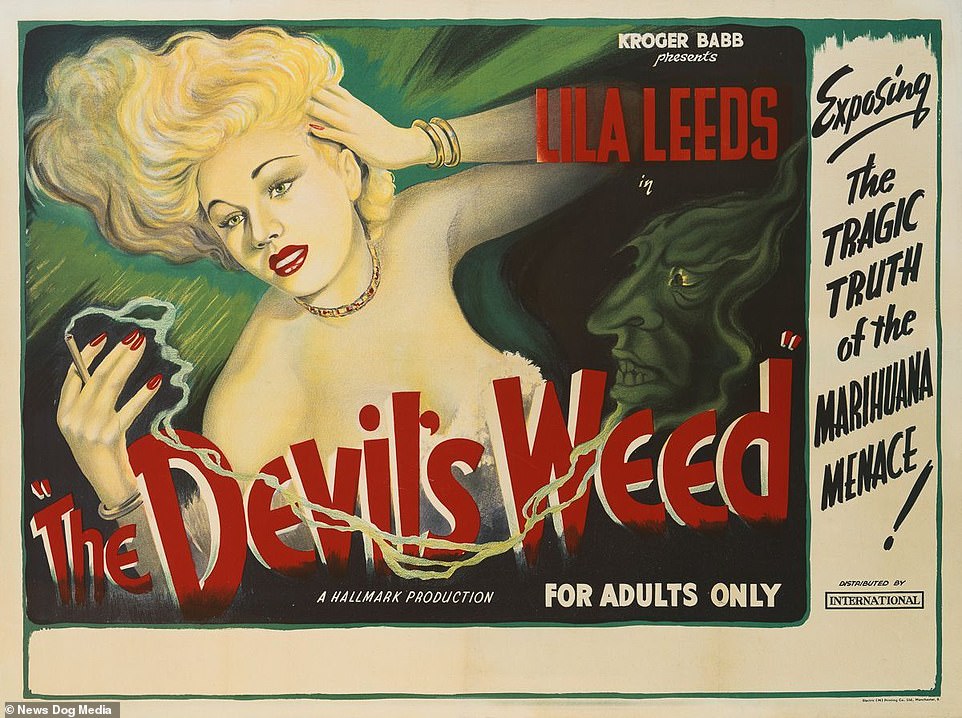 The Devil’s Weed – (for adults only) – ‘The tragic truth of the marihuana menace’, claimed in this piece of 20th Century anti-cannabis propaganda

And 2020 was supposed to be a celebration of the hemp plant across America and the rest of the world – before it was hugely curtailed due to the Covid-19 pandemic.

But outlandish posters from the early 20th Century have re-emerged from a time when the US Administration was actively demonizing marijuana – a far cry from the relaxed attitude that the modern day United States holds.

Harry Anslinger, the Federal Bureau of Narcotics Commissioner, held a crusade against cannabis starting in the 1930s when the propaganda machines rolled into action.

This, despite previously speaking on record about marijuana, calling the danger of the drug ‘laughable’ and the idea that it might lead to madness or violent behavior an ‘absurd fallacy.’

He began pumping out films and adverts that relied on anecdotal evidence, such as Victor Licata, who allegedly murdered his family with an axe while high on cannabis. However, it was later understood that he was mentally ill.

Other adverts focused on the corruption of young women, with posters that read: ‘A good girl until she lights a reefer.’ 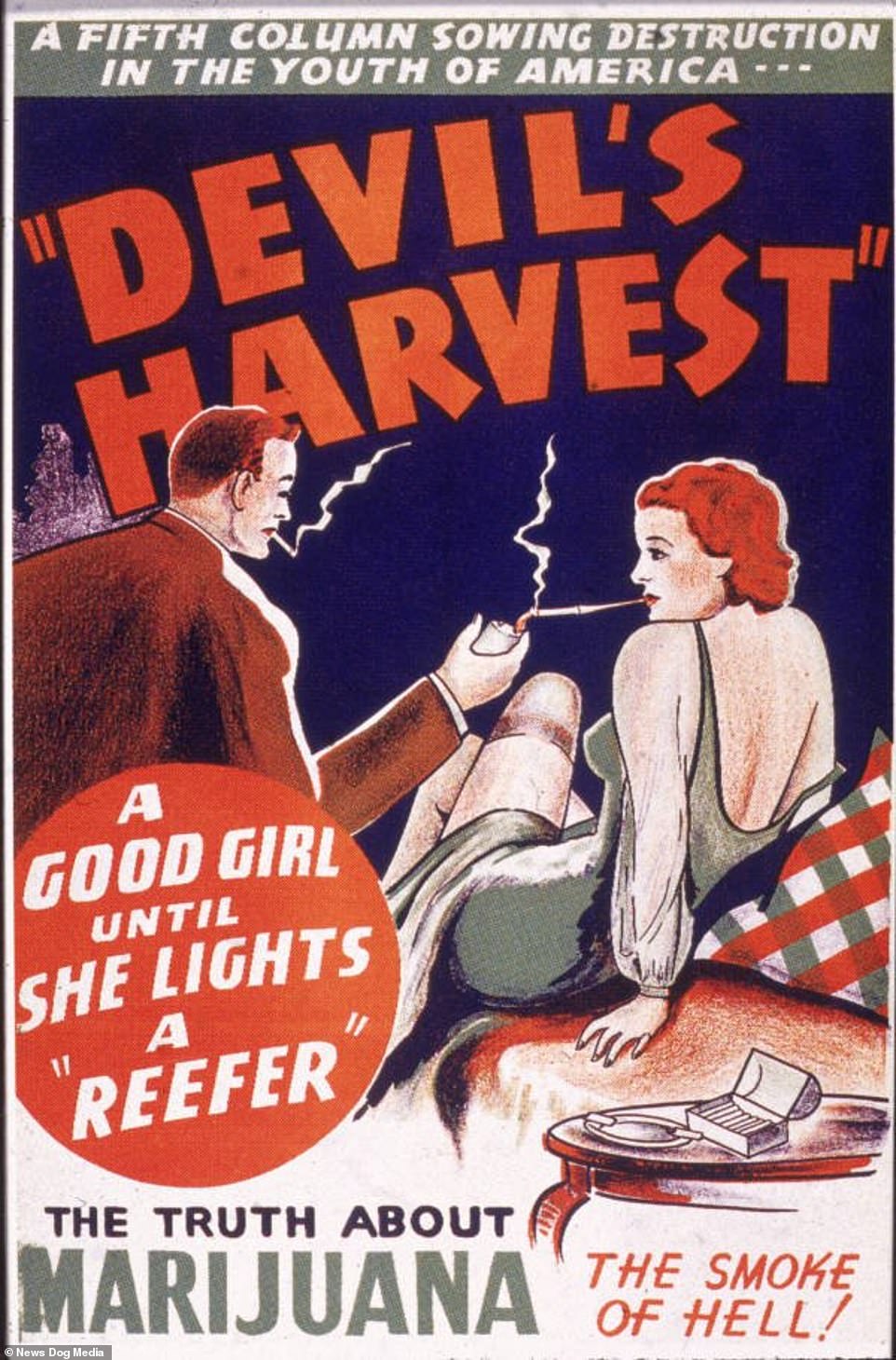 Some adverts chose to focus on the corruption of young women by marijuana, with posters that read: ‘A good girl until she lights a reefer’ 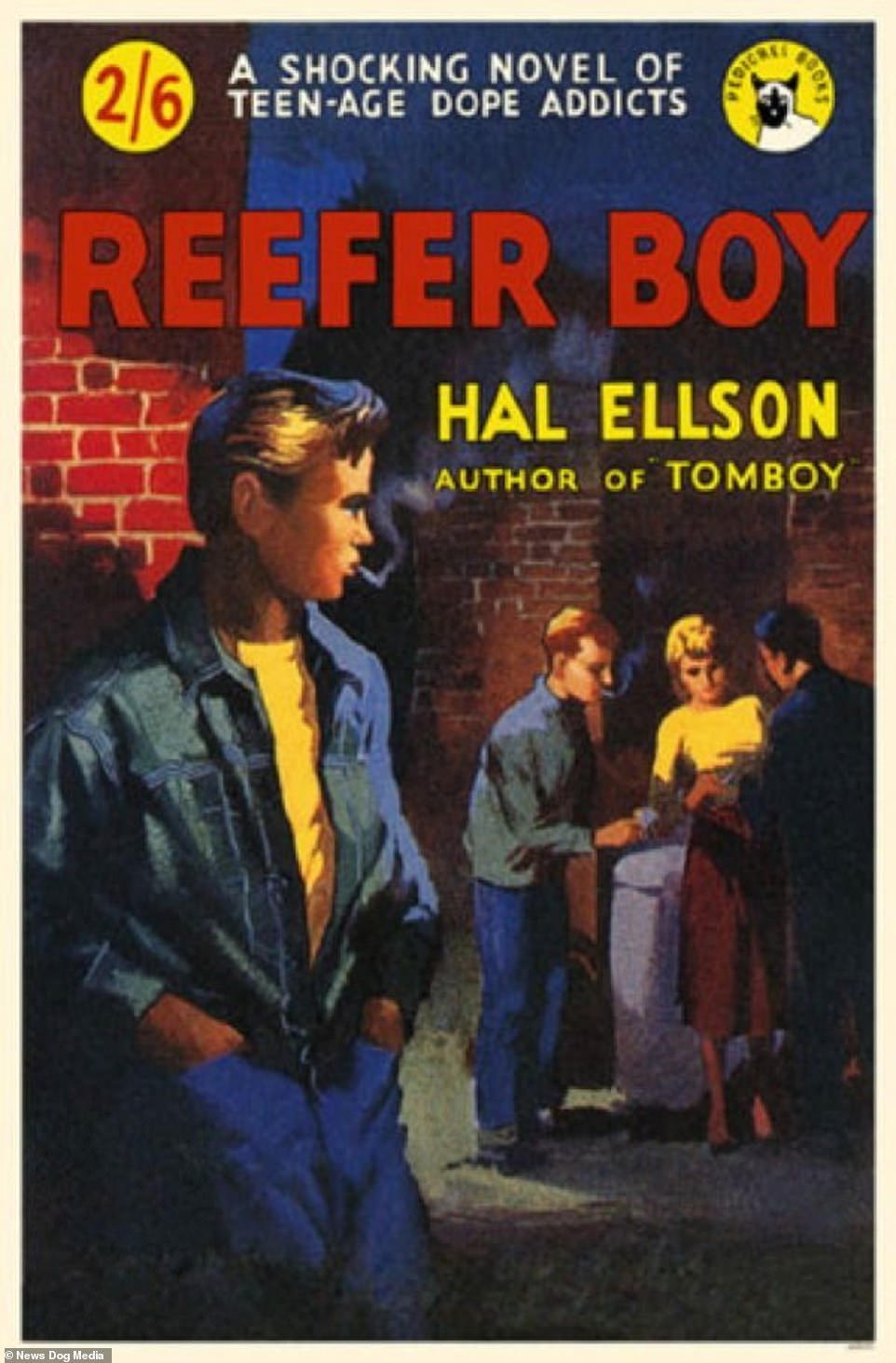 Reefer Boy, a novel, depicting a young man effectively on the ‘outside of society’, not to be trusted and shifty-looking, lurking in the shadows 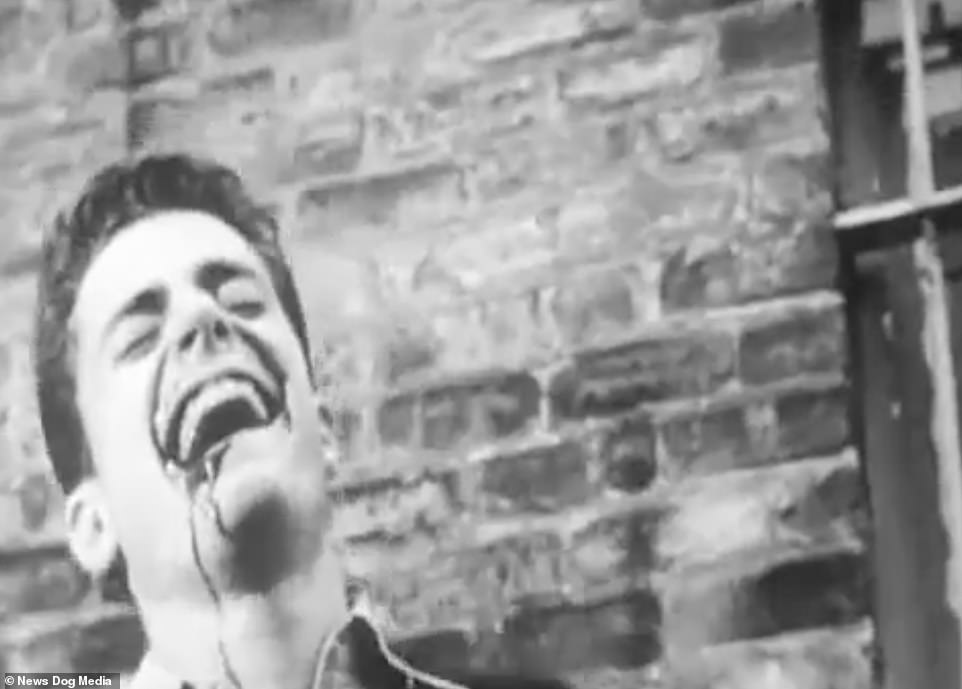 ‘Drug Addiction’, a video from 1951 (pictured), shows young men who have just smoked a reefer drinking cola with broken glass in and cutting their mouths whilst laughing hysterically

One laughable video called ‘Drug Addiction’ from 1951, shows young men who have just ‘smoked a reefer’ drinking cola with glass in and cutting their mouths whilst laughing hysterically.

Doctors and pharmacists contacted Mr Anslinger to tell him that the drug didn’t pose a serious danger – however he ignored their claims.

At the time, marijuana use wasn’t widespread – but on the radio and on talk shows, Anslinger described an epidemic.

He said it was a ‘shortcut to the insane asylum’ and could make ‘a murderer who kills for the love of killing out of the mildest mannered man.’ 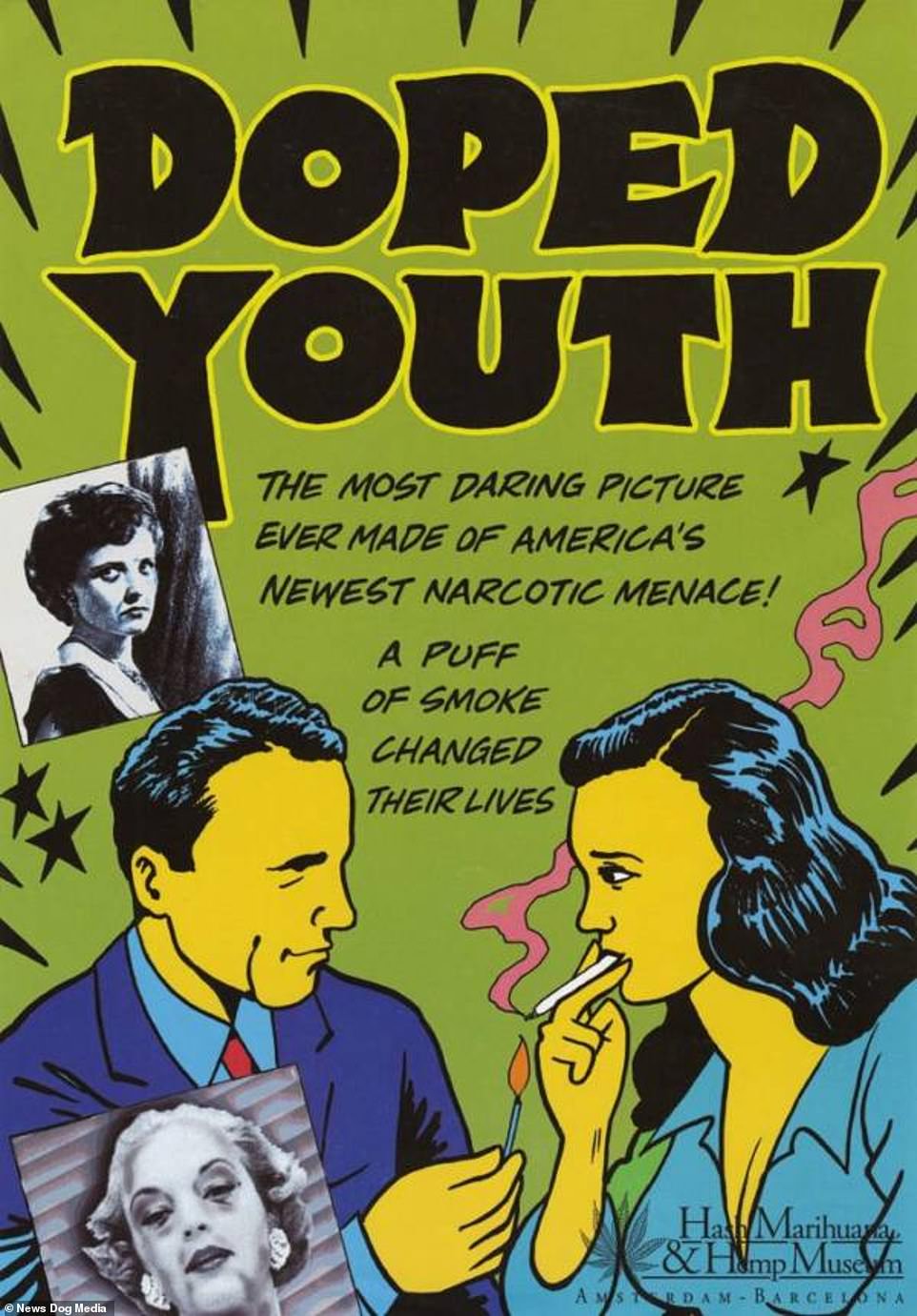 Doped Youth – this poster shows a young man and woman sharing and smoking marijuana, stating that merely ‘a puff of smoke changed their lives’ 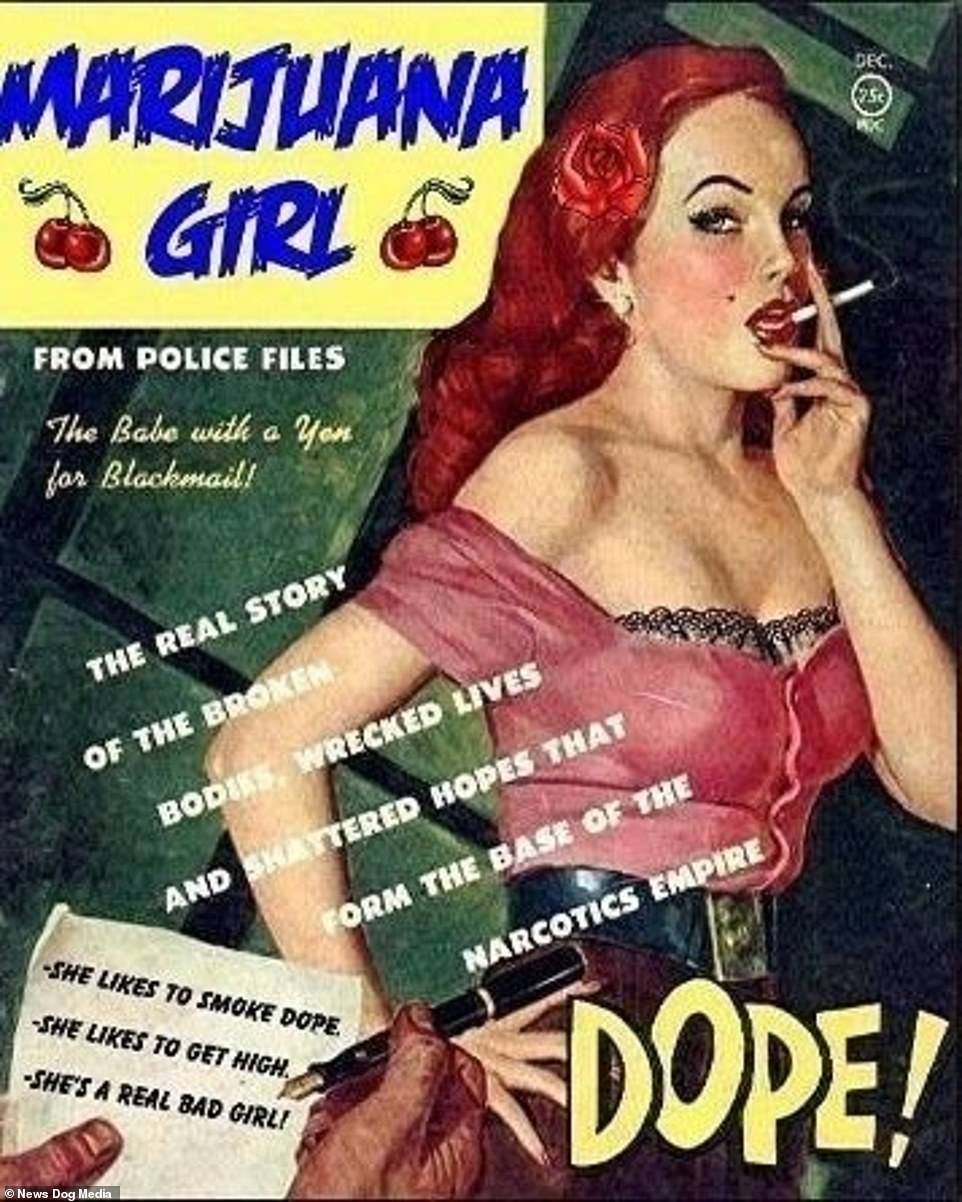 Marijuana Girl – yet more propaganda depicting women as either victims of or purveyors of the drug, this time as a red-haired temptress who ‘likes to get high’ and is ‘a real bad girl’ 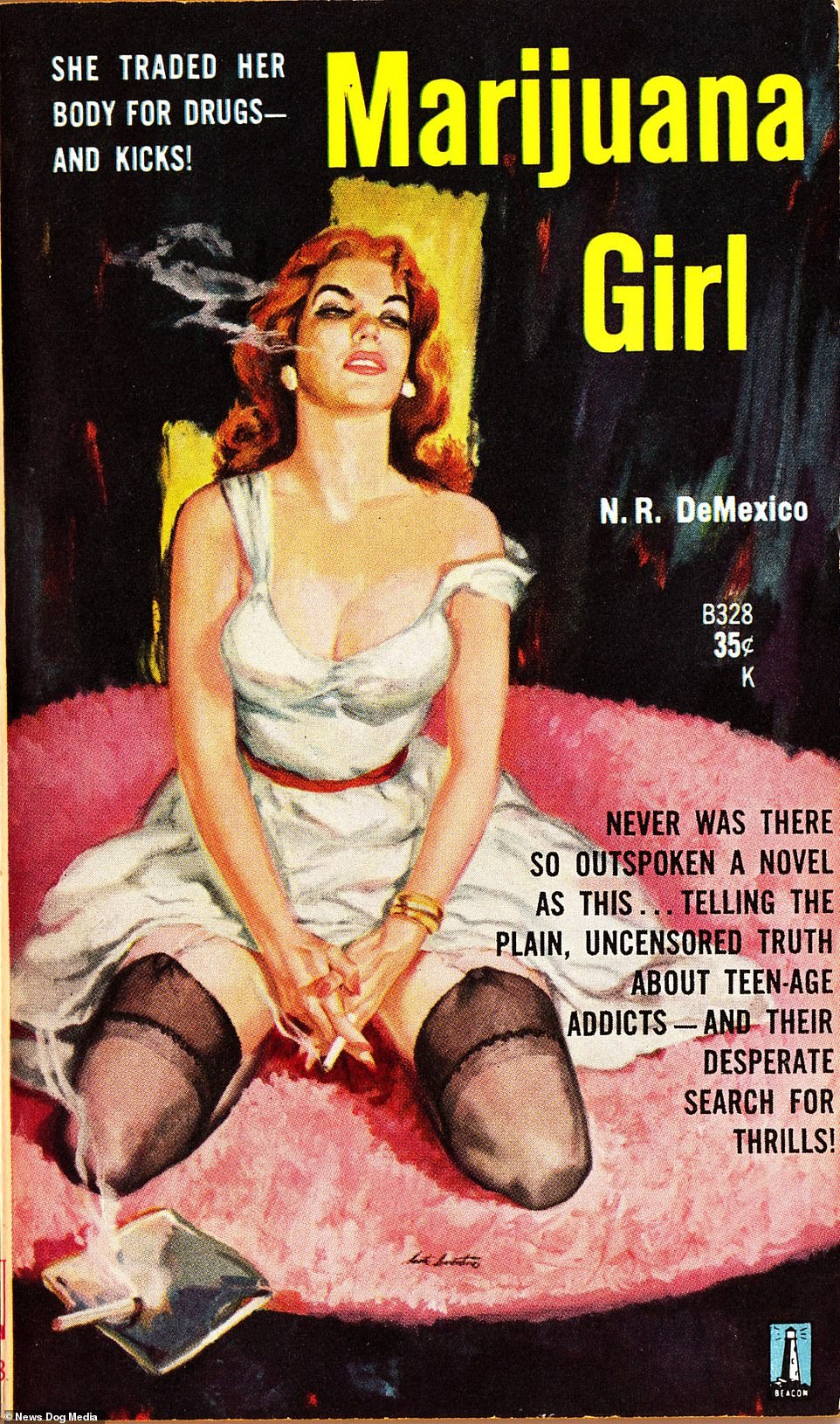 Marijuana Girl – this novel, showing on the cover a girl smoking cannabis, attempts to link marijuana use with prostitution and with a ‘desperate search for thrills’ 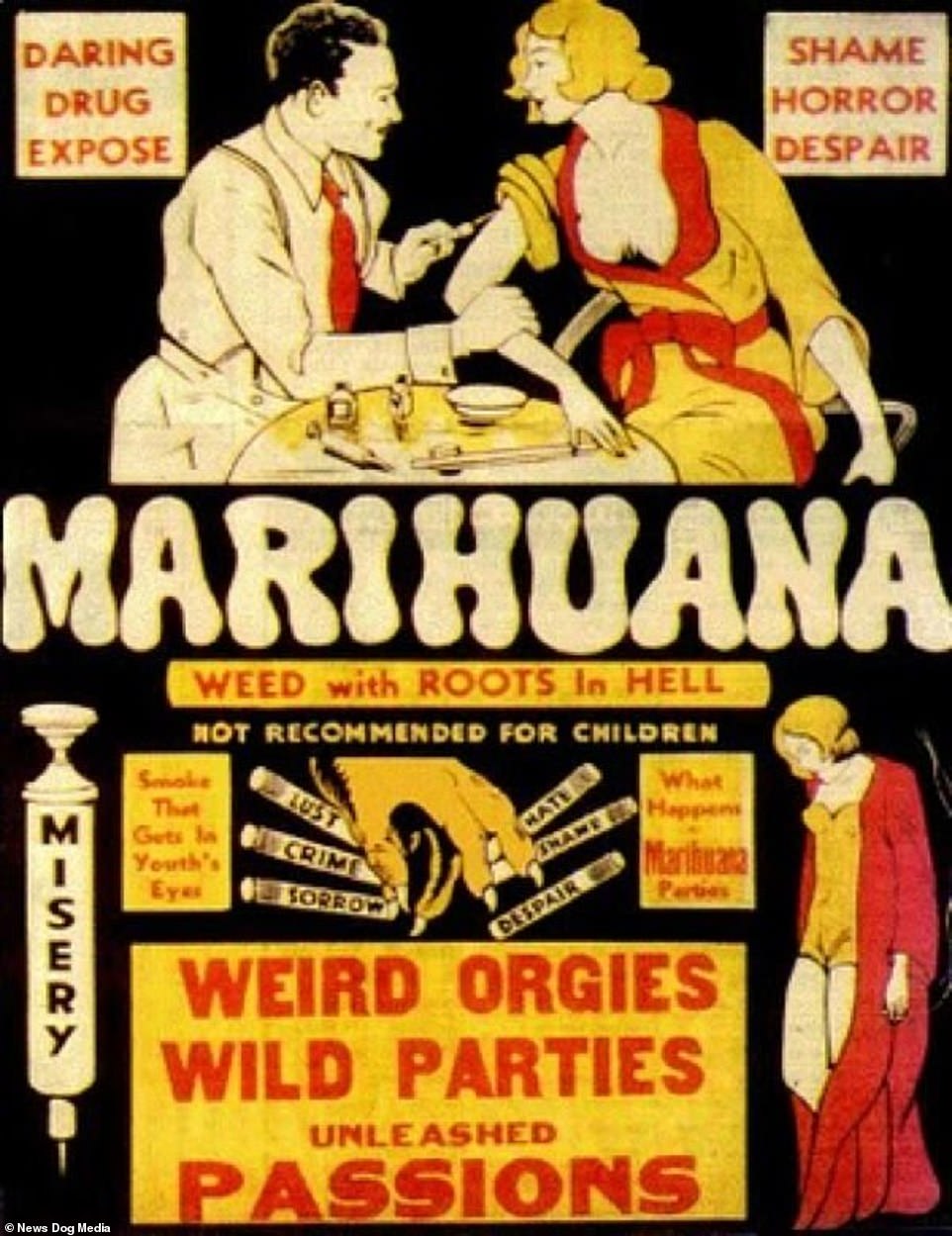 His anti-marijuana propaganda had strong racial undertones. He persecuted jazz musicians, saying that weed was leading them to make the Devil’s music.

Under his influence, the term ‘cannabis’ was replaced with the Spanish word ‘marijuana’ – a shift he used to link the drug and its usage to Latinos.

Thanks to his strategic use of mass media and emotionally jarring headlines steeped in racism, anti-marijuana propaganda spread from sea to shining sea, uniting an otherwise struggling and divided nation in a fight against the drug.

The anti-marijuana fervor only escalated throughout the latter half of the 20th Century, and since Richard Nixon formally declared a war on drugs in 1971, the US government has spent around $1 trillion fighting the illegal drug trade.

However, in recent times, the United States has relaxed its views on marijuana.

While it still remains federally illegal, many states have now legalized or decriminalized the drug. 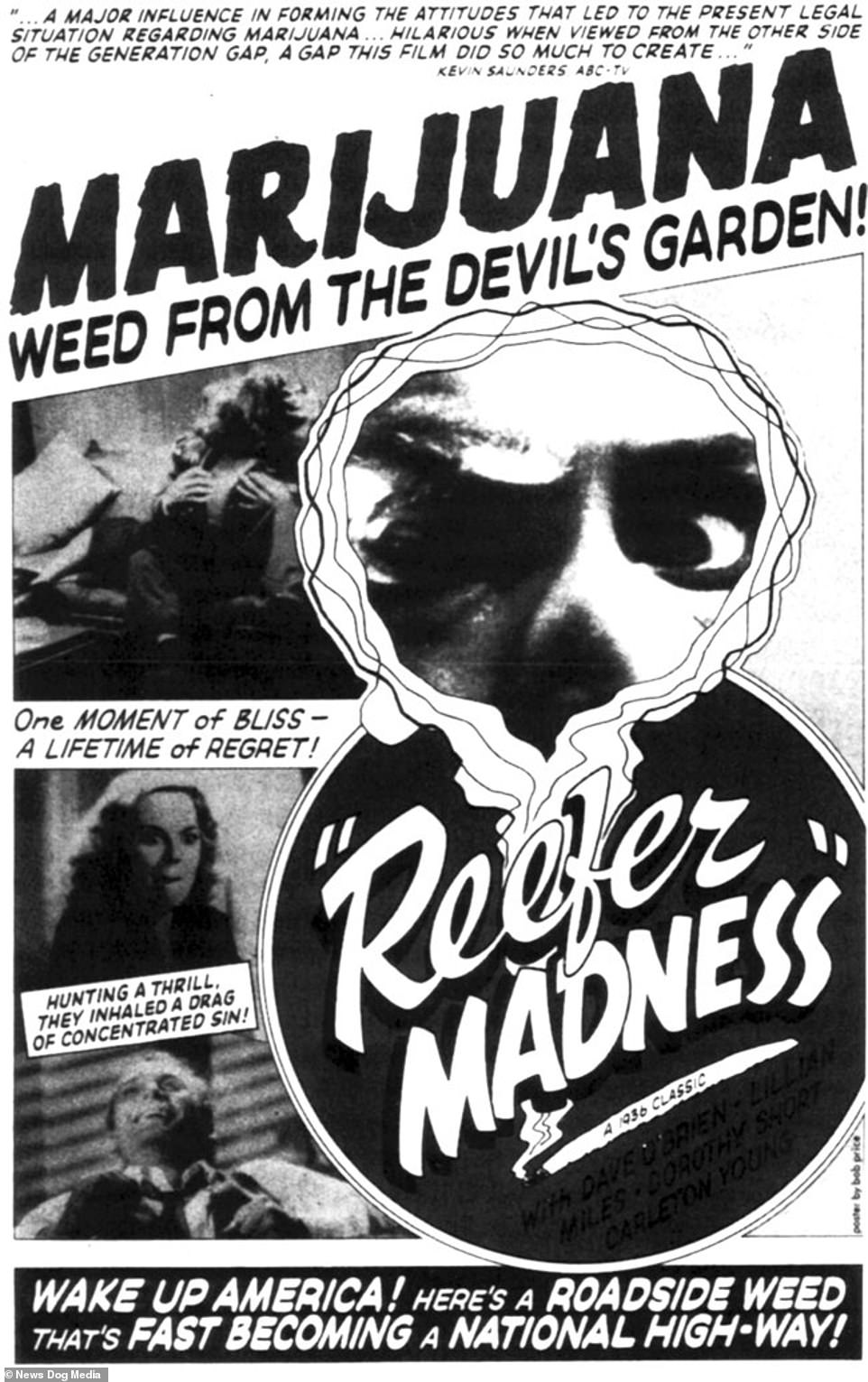 Reefer Madness – The anti-marijuana fervor only escalated throughout the latter half of the 20th Century, and since Richard Nixon formally declared a war on drugs in 1971 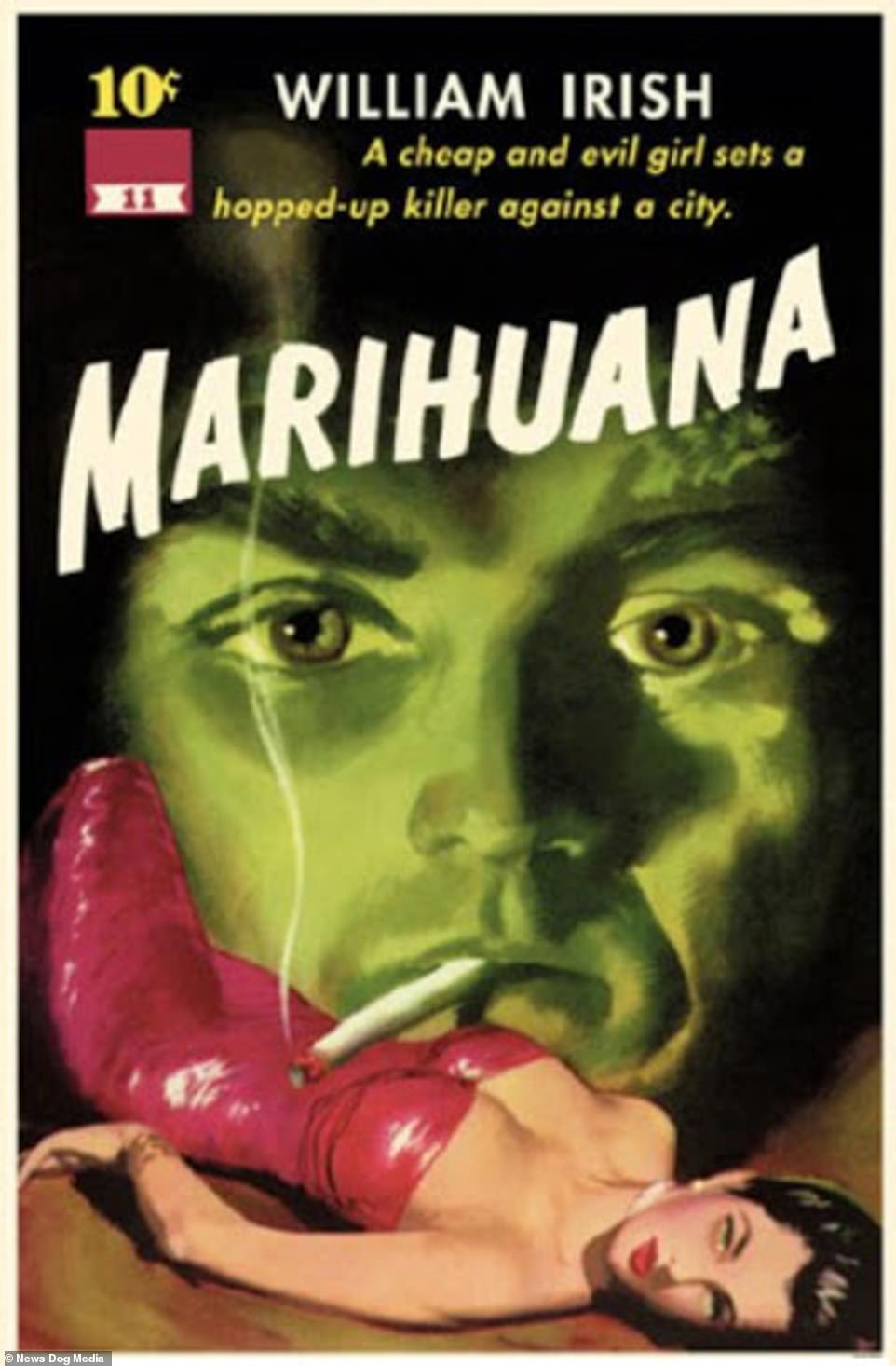 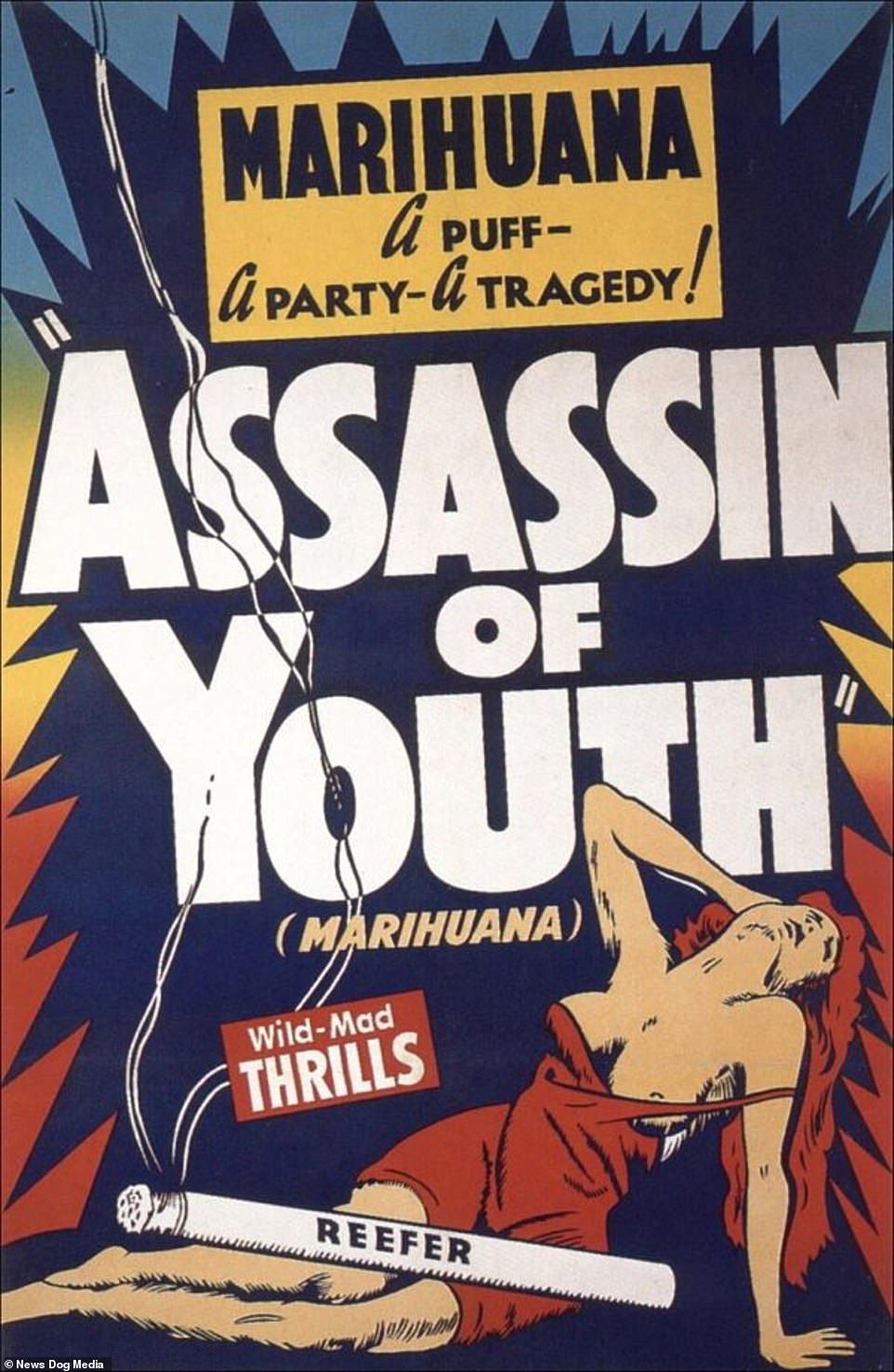 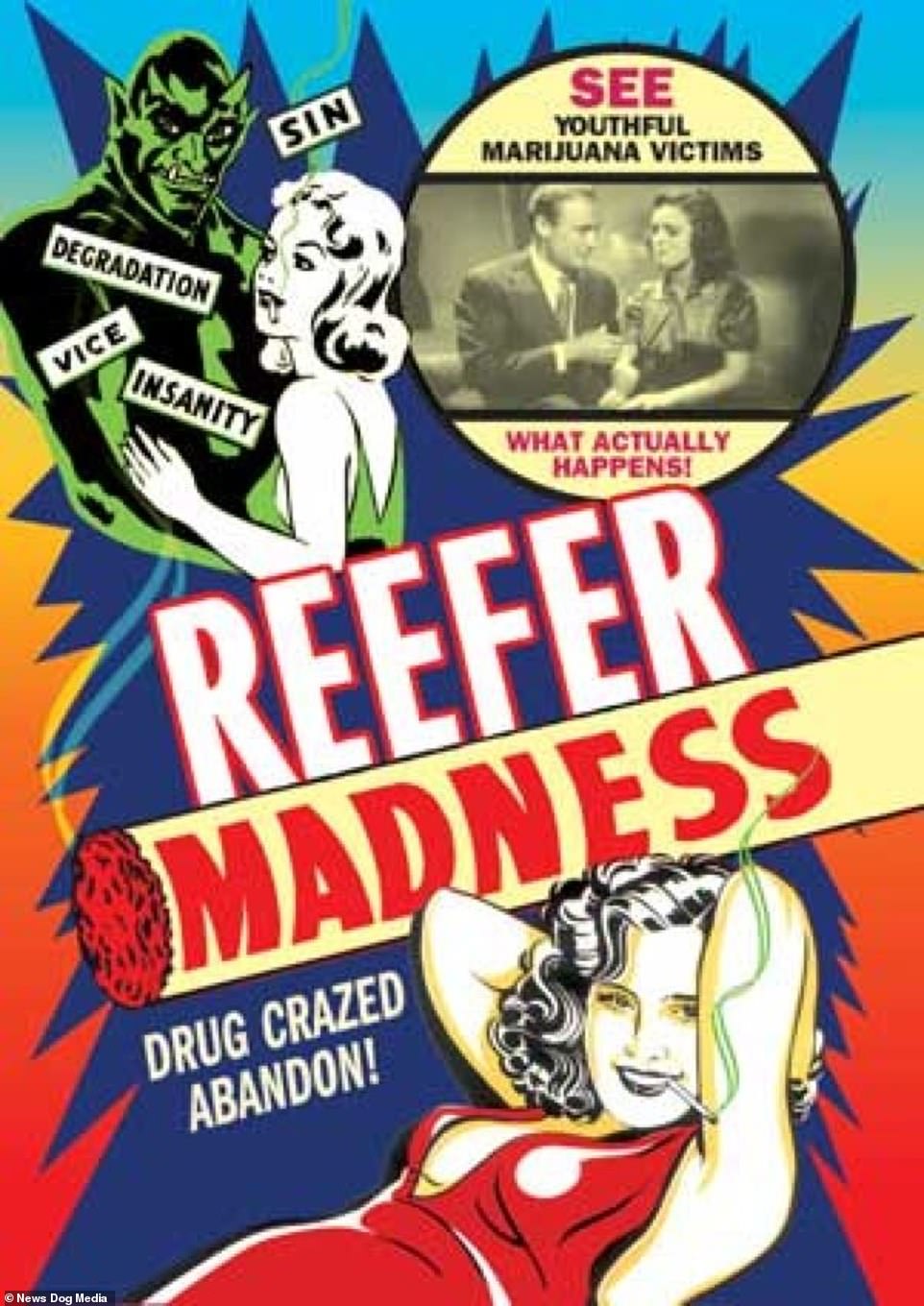 Reefer Madness – this explosive poster claims marijuana users engage in ‘drug crazed abandon’ and that ‘sin, degradation, vice and insanity’ await those who use it