You’re reading a copy of this week’s edition of the New Cannabis Ventures weekly newsletter, which we have been publishing since October 2015. The newsletter includes unique insight to help our readers stay ahead of the curve as well as links to the week’s most important news.

This past week, the New Cannabis Ventures Global Cannabis Stock Index soared 26%, its best week since late March, when the index bounced off of its weekly all-time closing low and rallied 32%. We ended the week at 32.17, gaining 38% over seven trading sessions and leaving the index almost 90% above its March 18th low: 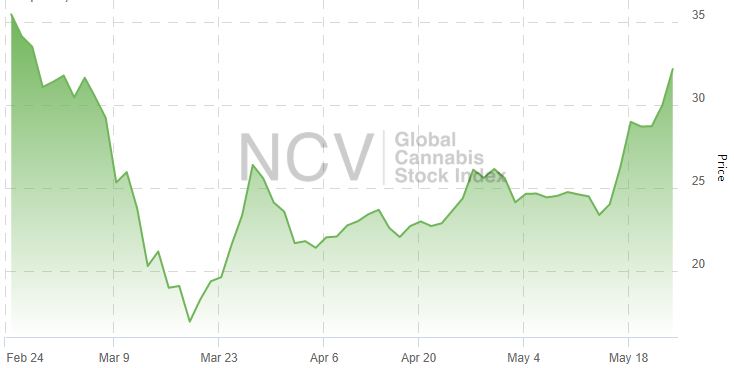 Even with the big rally over the past nine weeks, the index remains down 24% this year so far and still below levels seen in February. While stocks in general have been in decline since February, when the S&P 500 put in an all-time high, cannabis stocks have been in a bear market for more than a year.

Why Cannabis Stocks Are Going Up

Trying to explain the rationale for a move is always speculation, as no one knows for sure what drives explosive rallies. One explanation may be simply short-covering. It could also be just that traders returned to a sector they had abandoned. The reality is likely a combination of both of these. Quite simply, with prices still way down but a bottom likely in and stocks in general stabilizing, cannabis stocks were ripe for the picking.

The rally began with a small lift Thursday a week ago ahead of the Aurora Cannabis fiscal Q3 financial report. In fact, that day, the stock reversed off on all-time low set early in the session at C$7.50 to close at C$9.20, up 11% on the day. It had begun the week having closed on the 8th at C$10.92. The company exceeded revenue expectations, reduced its operating loss, announced divestitures and guided for positive EBITDA in the September quarter, all of which sent the stock 69% higher last Friday, with U.S. trading exceeding $1 billion and sparking interest across the sector. Written off for dead, with shorts piling on after its reverse split earlier that week, Aurora Cannabis was the initial catalyst that lured traders back to the sector it seems. Also helping to get the market rallying, in our view, was the GTI Q1 report showing revenue in excess of $100 million, well ahead of expectations and driving a big profit.

This past week, Aurora Cannabis again appears to have played a big role, as its American CBD acquisition announcement sent the stock soaring. The New York Post’s picking up a recently published story out of Canada about CBD potentially showing “promise blocking coronavirus infection” was gasoline on the fire. Across the board, volume picked up in the sector during the week.

The Rally May Be Sustainable

A quote by legendary investor Howard Marks of Oaktree in the New York Times in early March caught our attention: “There will come a day when we reach a bottom. We have no idea when or where that bottom will be. But all great investments begin with discomfort. You make the big money buying things no one else will buy.” Of course, he wasn’t speaking directly about cannabis stocks. His comments, which were just two weeks ahead of the S&P 500 low (at least for now!), certainly apply as well to cannabis stocks. We ran a survey in this newsletter, and the respondents were overwhelmingly negative right at the bottom.

It’s always a challenge to call a bottom in real-time, and calling one in the cannabis sector has been an exercise in futility. We shared our view that the bottom for cannabis stocks was likely in with subscribers at 420 Investor the evening Aurora Cannabis reported, though we had certainly expressed our belief that the bottom was possibly in much earlier. For the past two months, we have been discussing our views regularly that while many cannabis operators are likely to be crippled or bankrupted by the escalation of the capital crunch, those that are able to survive will actually thrive, and investors seem to have picked up on this. Three of the top four MSOs and Canopy Growth are outperforming the S&P 500 in 2020. Several ancillary companies in the U.S. are up year-to-date, including GrowGeneration (62%), Innovative Industrial Properties (9%) and Akerna (6%).

The Third Wave for Cannabis Stocks

From our perspective, interest in the sector has just started to return. We expect that a lot of stocks that are rallying could be dead-cat bounces and short-squeezes, but, at the same time, those companies with strong access to capital, good cash flow and defensible valuations could offer investors outsized returns ahead. We note that the four largest MSOs lagged the overall market move since May 13th, with returns ranging from 12.5% to 29.2%, all less than the 37.8% market move. Finally, we think valuations for public stocks are better than they have ever been, and expectations are certainly tempered regarding growth prospects.

We believe the market is transitioning to what we are calling the third wave for cannabis stocks. The first wave began in late 2012 or early 2013, when there were few publicly-traded cannabis stocks and few that were even real companies. The legalization in Colorado sparked a massive rally that petered out until early 2016, when the second wave began. This next phase saw Canada move forward with legalization for adult-use and many states legalize as well, including California. The second wave peaked as California implemented its legalization and was followed by the 2019 vaping crisis and then the pandemic.

The third wave is likely to see regulatory reforms in the U.S. at the state level and possibly the federal level, more states embracing adult-use cannabis such as Arizona, Florida, New Jersey, New York and perhaps Pennsylvania, improvements in key markets like Canada, California and Massachusetts, that have been slow to roll out, well funded private MSOs debut on the public markets and the first cannabis public companies to exceed $1 billion in revenue annually. This next rising tide will not lift all boats, but we are optimistic that investors who follow fundamentally sound companies could enjoy better returns ahead after two straight years with market declines of 34% in 2019 and 55% in 2018.

FREE WEBINAR: Reveal the secrets of the Cannabis plant with NRGene’s genomics database, a sponsor of this week’s newsletter. 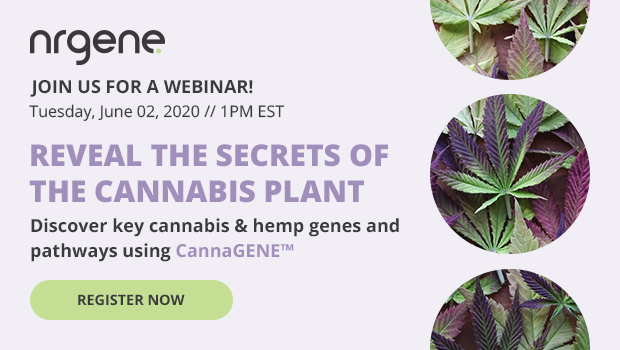 The high complexity level of hemp/cannabis genome, combined with vast diversity between the lines, present considerable obstacles for any research or breeding program. NRGene’s CannaGENE™ is a vast genomics database that reflects the cannabis complexity and diversity and allows improved planning of any research or breeding program. This webinar will showcase the CannaGENE™ demo, demonstrating various use cases of its application. Click Here to Sign Up.