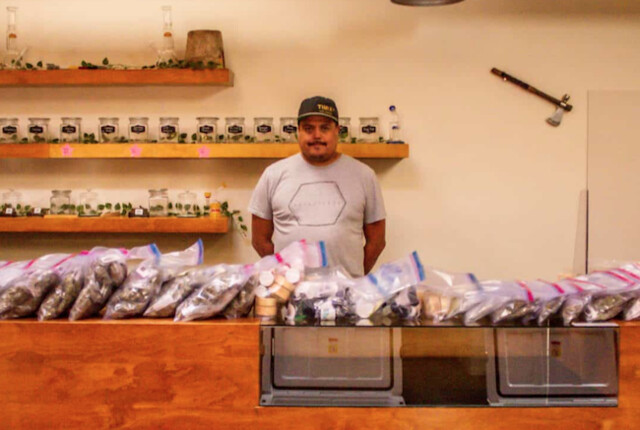 Cory Brewer, owner of Tupa’s Joint, stands behind products packaged for seizure by the CSU.

Cory Brewer has no plans of backing down after the Okanagan Indian Band member recently had his Tupa’s Joint cannabis dispensary raided by the BC Community Safety Unit.

The store sells cannabis and hemp products, but is also a healing centre focused on cultural wellness.

However, Tupa’s Joint doesn’t have a provincial licence to sell cannabis – and Brewer told Indiginews he has no plans on getting one.

“As far as I’m concerned, we’re not doing anything wrong within our territory,” said Brewer, who owns three cannabis shops on reserve with a staff 20, 18 of whom are indigenous.

Tupa’s Joint, his first store off reserve, opened in downtown Vernon with a letter of support from the OKIB.

Brewer points to the United Nations Declaration on the Rights of Indigenous Peoples (UNDRIP), that he said has legislation allowing him to assert his sovereignty off reserve.

“We’re going to be exercising our right within our traditional territory, and not only on reserve. Those days are past. Especially where UNDRIP was passed,” Brewer said, adding provincial cannabis laws, are enforcing the Federal Cannabis Act, but UNDRIP is also a provincial legislation that needs to be upheld.

“For me, it was never about testing the law, it was about exercising our rights, and working together to see it go forward properly,” he said.

The Ministry of Public Safety has refused to comment on the situation.

Brewer doesn’t believe charges will be laid against him, but he expects to be fined by the CSU. He says he is within his rights to sell marijuana without a provincial licence because he is operating under OKIB law.

For Brewer, this is a bigger fight than the recent incident with the CSU, it’s about exercising his rights as a member of a sovereign nation.

“Our cannabis law supersedes the provincial law. We’re federal, and we’re sovereign, so how we’re going about it is different than anybody else,” he said.

– with files from Indiginews