Casey Honeyager, local representative for the Rize Cannabis project, stands in front of the Rize UP building at 1580 North Stephenson Ave. in Iron Mountain. Rize may begin marijuana sales at the location as soon as July 1.
(Theresa Proudfit/Daily News photos)

IRON MOUNTAIN — Recreational marijuana sales will begin this summer in Dickinson and Iron counties if plans by developers stay on course.

Rize Cannabis hopes to begin sales July 1 at 1580 N. Stephenson Ave., but the date isn’t definite, said Casey Honeyager of Republic, manager for the Iron Mountain project. “It’s having all the T’s crossed and the I’s dotted,” he explained.

A retail business in Crystal Falls could potentially be licensed in a month or two, while Lume Cannabis Co.’s downtown Iron Mountain shop may not open until 2021.

Rize is the biggest investor locally, having promised a $5 million project and 60 to 90 jobs in securing one of Iron Mountain’s two licenses for dispensaries. Before the coronavirus arrived, the company had targeted late April to begin adult-use sales.

“It has been a scary time with COVID,” Honeyager said. “We shut down for seven weeks and now take precautions to prevent the spread. We look forward to being part of this great community in Iron Mountain.” 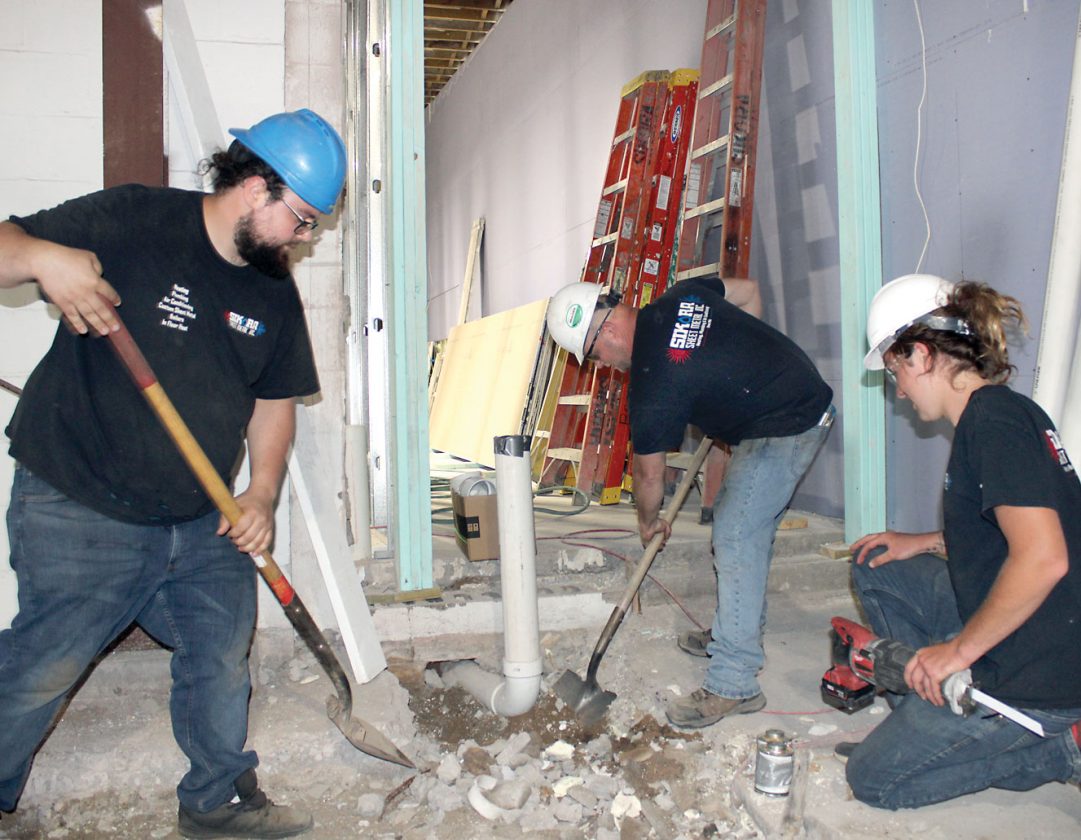 Joe Occhietti , Mike Winch and Lance Miller of Sikora Sheet Metal Inc. work on the plumbing at the Rize UP building in Iron Mountain.

Renovating a former soft drink plant a quarter-mile south of Industrial Drive, Rize is several months away from getting its growing and processing facility launched. The company also plans to open downstate facilities in Madison Heights and Traverse City.

The owners of Rize, according to the company’s application, are Nick Issak of Macomb and Julie Wentworth of Bay Harbor.

Lume Cannabis is coming to Iron Mountain in cooperation with Attitude Wellness, owned by Robert Barnes of Evart, who offered a $2.18 million investment and 20 jobs in gaining the city’s second dispensary license.

The retail business will be at 117 and 119 S. Stephenson Ave., where substantial work is needed on structures first erected in the late 1800s. 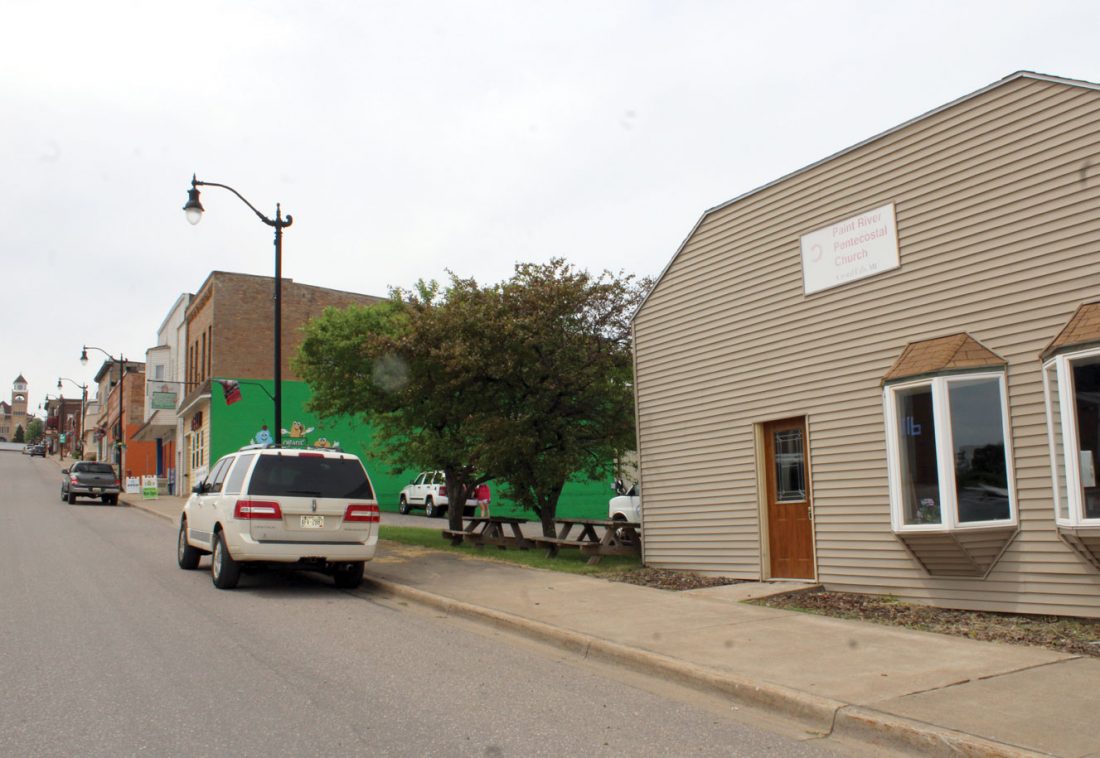 A former church building at 116 Superior Ave. in Crystal Falls has been sold to a developer who plans to have a marijuana retail outlet at the downtown site, along with a growing and processing facility in the city’s industrial park.

Lume has opened a marijuana outlet in Negaunee, while a shop in Sault Ste. Marie should be ready by early September. The company has seven current locations in Lower Michigan, with six more planned.

Lume’s growing and processing facility in Iron Mountain will be on the west side of Hydraulic Falls Road between Stephenson Avenue and Breitung Cutoff Road. Although no ground has been broken, Hellyar envisions the facility serving all of Lume’s U.P. market, which may expand by as many as six locations.

Based in Troy, Lume has a large cultivation center in Evart.

In Iron County, the city of Crystal Falls adopted an ordinance in October to allow up to two retail licenses in the business district, plus an unlimited number for growing and processing in the industrial district.

“There’s a lot of interest,” said City Manager Gerard Valesano. “We’re filled with what our council was willing to allow for retail.”

Ottawa Inventions, which is renovating a former church at 116 Superior Ave. at the east end of downtown, hopes to open its Higher Love retail business yet this summer. The company plans a growing and processing facility in the industrial park on the city’s west end north of U.S. 2.

Ottawa Innovations is connected with Landmark Real Estate and Development, and Walter Moore, who purchased property in the industrial park for a

Casey Honeyager, local representative for the Rize Cannabis project, stands in front of the Rize UP building at 1580 North Stephenson Ave. in Iron Mountain. Rize may begin marijuana sales at the location as soon as July 1.
(Theresa Proudfit/Daily News photos)

Joe Occhietti , Mike Winch and Lance Miller of Sikora Sheet Metal Inc. work on the plumbing at the Rize UP building in Iron Mountain.

A former church building at 116 Superior Ave. in Crystal Falls has been sold to a developer who plans to have a marijuana retail outlet at the downtown site, along with a growing and processing facility in the city’s industrial park.

token sum through the city’s economic development efforts. Valesano described it as “a pretty substantial operation,” providing as many as 40 jobs while housing 8,000 marijuana plants.

Another marijuana shop is planned at 32 Superior Ave. in the former Sentinel building, but no timetable has been announced. Donovan Burke of Northern High Lights LLC is the representative, having acquired industrial park property with plans to initially house up to 100 plants.

The city has platted areas in the industrial park to meet the needs of interested grow facilities. The businesses will provide a significant economic boost not only in wages and benefits but also in license fees, tax income and utility use, Valesano said.

Crystal Falls voters approved legalized marijuana in November 2018 with 370 yes to 308 no. The election was a factor in the city’s decision to go forward with licensing after initially declining.

“I think that had a lot to do with our council opting in,” Valesano said.

Iron Mountain adopted an ordinance in June 2019 to invite medical marijuana businesses and followed through in October with an ordinance for adult-use facilities.

Its limited licenses were awarded on a competitive basis, mainly emphasizing economic impact. While only two dispensaries will be permitted, up to five growing and processing operations are allowed.

Michigan voters chose to legalize marijuana for adults in November 2018, ten years after approving medical marijuana use. Iron Mountain’s vote in 2018 was 1,543 yes to 1,460 no.

The state’s Marijuana Regulatory Agency is charged with regulating and licensing marijuana establishments. Under legislation signed into law by Gov. Gretchen Whitmer in February, marijuana products must include warnings regarding risks to unborn children and children who are breastfeeding.

Today’s breaking news and more in your inbox


LORETTO — The Hamilton Lakes Board has authorized the treatment of Lake Mary, Lake Louise and Hamilton Lake for …

The main entrance off the …