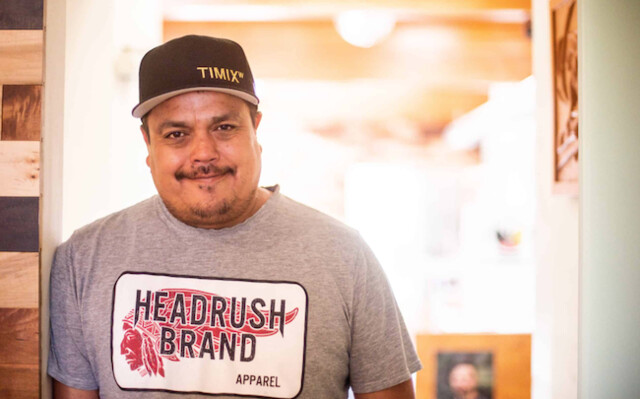 Cory Brewer, owner of Tupas Joint in downtown Vernon, was raided for a second time in the past month.

Tupas Joint, in downtown Vernon, had products seized by the Province of B.C.’s Community Safety Unit (CSU) for the second time this month.

IndigiNews reported on the first seizure that happened on June 10, where more than $10,000 worth of product was seized. Brewer says this time is no different than last, and he was anticipating this second seizure, which he hasn’t determined the value of yet.

“I knew they were coming. They talked to me last week, and usually, when they come to talk to me they come in again,” says Brewer.

For Brewer, it is much less about the additional products being seized but the conduct of the Province of B.C. in regards to issues that directly impact Indigenous peoples. He says he is working actively with other nations to create a framework that is created by Indigenous industry leaders throughout the province.

“I got a lot of attention within the nation and I got a lot of support, and if they want to do something now is the time,” says Brewer. “There are a lot of people getting a hold of me in a big way.”

Brewer believes this bill supports his assertion of sovereignty in opening up Tupa’s Joint.

When asked what the province of B.C. is doing to engage First Nations in the cannabis industry, a representative from the government says First Nations entrepreneurs need to apply for a provincial license, just like anybody else.

“LCRB (Liquor and Cannabis Regulation Branch) issues licences for stores operating both on and off-reserve,” says Hope Latham, public affairs officer for the Ministry of Public Safety and Solicitor General.

“The federal government is responsible for licensing cannabis production. It has established an Indigenous Navigator service that provides ongoing support to Indigenous applicants throughout the licensing process,” says Latham.

Although Brewer’s shop is located in Vernon on traditional Syilx territory, cannabis licensing is under provincial jurisdiction.

“The provincial Liquor and Cannabis Regulation Branch is responsible for enforcement of the provincial regulations regarding retail cannabis stores. Municipal government does not have a role in the adjudication of Aboriginal rights and title,” wrote City of Vernon Communications and Grants Manager, Christy Poirier, via email.

In the meantime, Tupas Joint will remain open and fully operational. Brewer is also organizing a multi-nation cannabis conference where the nations can begin conversations. The goal is “to bring together the nations to open the discussions to developing a working framework that includes First Nations,” he says.