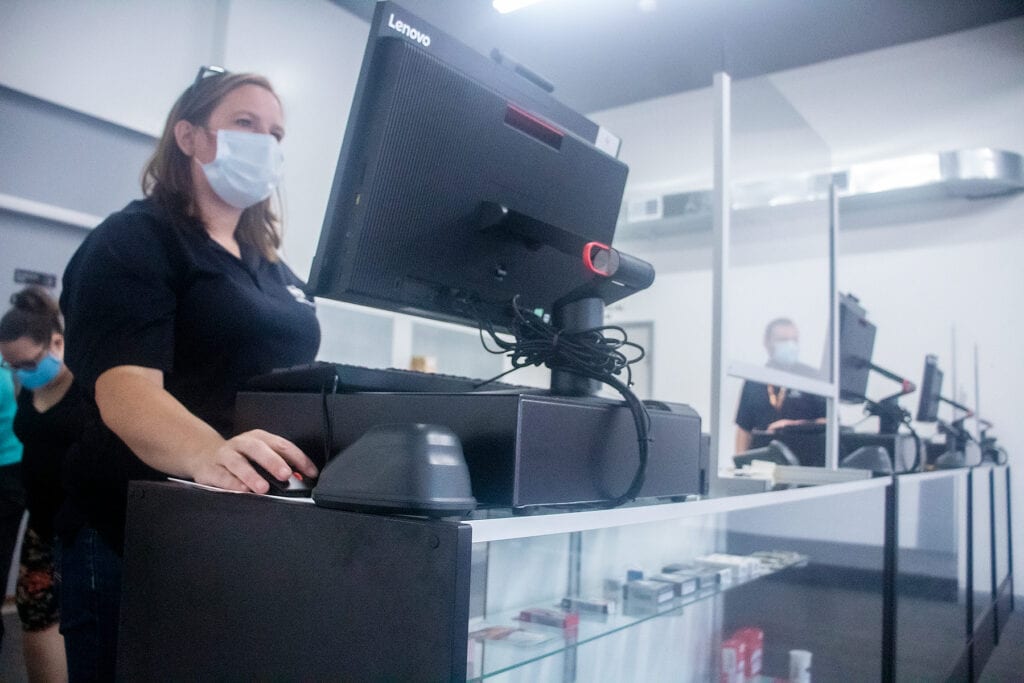 Agri-Med budtenders look through their databases to find the kind of marijuana product that can best suit their client’s needs. On Monday, Agri-Med celebrated the soft opening of its new recreational and medical marijuana establishment in Edmore. — DN Photo | Brandon Schreur

EDMORE — A Muskegon-based company has set up shop in Edmore to become the first official recreational and medical marijuana business in Montcalm County.

Agri-Med, which celebrated a soft opening on Monday in preparation for a ribbon-cutting ceremony this Thursday, is located at 202 E. Main St. in Edmore.

Vice President Tracy Powers told the Daily News the Edmore location will be the company’s third marijuana store, with two others currently open in Muskegon and Nunica.

“We got our approval from the (Edmore Village Council) and then we wanted to get open as quickly as we could in the summer months,” Powers said. “That’s kind of always been our MO — we were the first to open in Muskegon County, the first in Ottawa County and, now, this is the first in Montcalm County.”

Agri-Med’s Edmore location aims to provide clients with safe access to medical and recreational marijuana, depending on what their needs may be.

“People come in the front door and we have someone check them in,” Powers explained. “If they need medical marijuana, we check their medical card and ID. If they’re looking for recreational, we only check their ID to make sure they’re old enough.”

Clients then go into the salesroom where they connect one-on-one with “budtenders,” an experienced individual capable of recommending a product that best suits their needs. 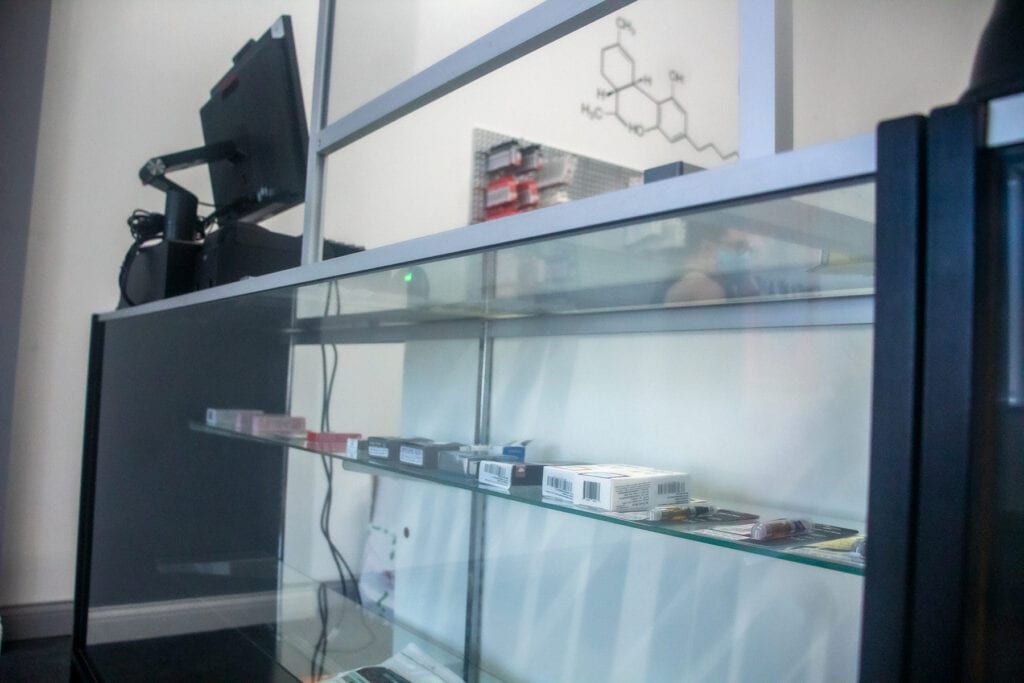 Inside the salesroom at Agri-Med, which opened its medical and recreational marijuana establishment in Edmore on Monday, are various marijuana-related products provided to clients by budtenders. — DN Photo | Brandon Schreur

“If people are looking for trouble with sleep or pain relief, they can commend that,” Powers said. “If they want something that’s uplifting or something that’s relaxing, they can help guide them to the right products for that, too. A lot of people come in and know exactly what they want, but we get a lot of first-timers, especially with recreational. A lot of people haven’t touched this stuff since the 1960s or ’70s, and they’re coming in now to find it’s a completely different animal than it was back then.”

Powers says the Edmore location will employ 15 people, many of whom live in the Montcalm County area.

The process of bringing Agri-Med to Edmore, Powers explained, started approximately three or four months ago.

“It’s a little bit out of the way for us, since we’re coming from Muskegon,” she said. “Greg (Maki), the owner, kind of stumbled upon this location. The gentleman who had this store before was hoping to get a license, himself. For whatever reason, he didn’t complete that process, but he had already completed some of the necessary steps to transform the building. We did a little remodeling and had a real quick turnaround on the place.” 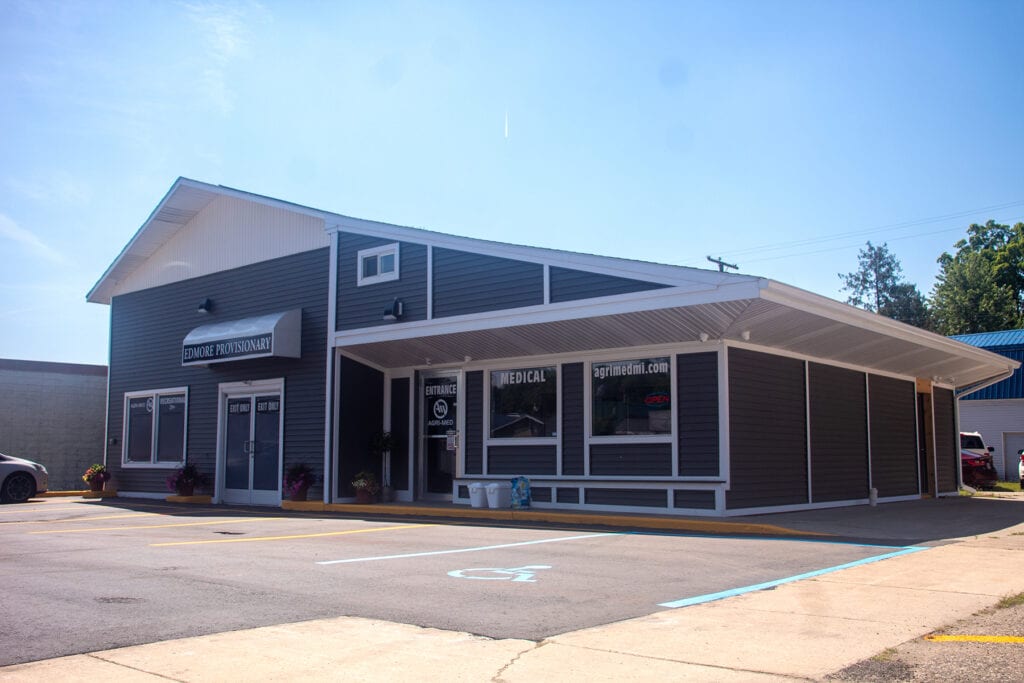 On Monday, Agri-Med, which is based in Muskegon, celebrated the opening of its recreational and medical marijuana business in Edmore. The company will host an official ribbon-cutting ceremony at the store, located at 202 E. Main St., at 11 a.m. Thursday. — DN Photo | Brandon Schreur

“Once the ordinances became effective in February, Agri-Med secured themselves in the location they’re at now,” Village Manager Justin Lakamper told the Daily News.

On April 13, the Village Council unanimously granted Agri-Med two marijuana-related licenses, one as a retailer to sell recreational marijuana and the other as a provisioning center to sell medical marijuana.

“There is one other group that has been issued the same license (as Agri-Med) that’s going through the process as well,” Lakamper said. “They’re also setting up on Main Street.”

Lakamper says he’s received little to no pushback from the community about marijuana establishments opening up in Edmore.

“We held at least three public hearings at which people were able to comment on some portion of this process,” he said. “There was limited criticism. Since the ordinances and licenses passed, nobody has contacted me in dispute of anything.”

Being the first to open in Montcalm County, Powers says, provides Agri-Med with a few benefits they hope to capitalize on in the coming months.

“At this time, there isn’t a lot of competition in the area,” Powers said. “There are stores in Evart, Big Rapids and in Grant, but, beyond that, it’s all the way down to Grand Rapids or Lansing. We kind of own it right now, and being first to market is super, super important.”

Powers said that the Edmore area, in particular, matched a lot of the criteria that Agri-Med was looking for when setting up a new shop.

“The village itself is very welcoming and accommodating. They were looking for the investment and they were interested in what we do,” she said. “We spent a year before we opened (in Muskegon) fighting to find a municipality that would allow us as a medical, let alone recreational, store. The fact that (Edmore) started as recreational and medical right off the bat was a huge plus for us.”

If the township had only opted into medical marijuana, Powers said Agri-Med likely would not have opened in Edmore.

“There is not enough population and medical cardholders to really make it worth that investment,” she said. “There’s a significant investment through the state, the licensing process and everything else we had to go through just to open our doors. Edmore was very easy to work with through all that. We also like being just off M-46 with a high traffic count.”

Maki also voiced his support about bringing Agri-Med to the Edmore area.

“I’m excited about the opportunity to bring safe, legal and high-quality cannabis to adults in Edmore,” he said. “I believe that people should be able to purchase legal cannabis in their own community and not have to travel — just like buying groceries, tires or pizza, you should be able to shop in your own town.” 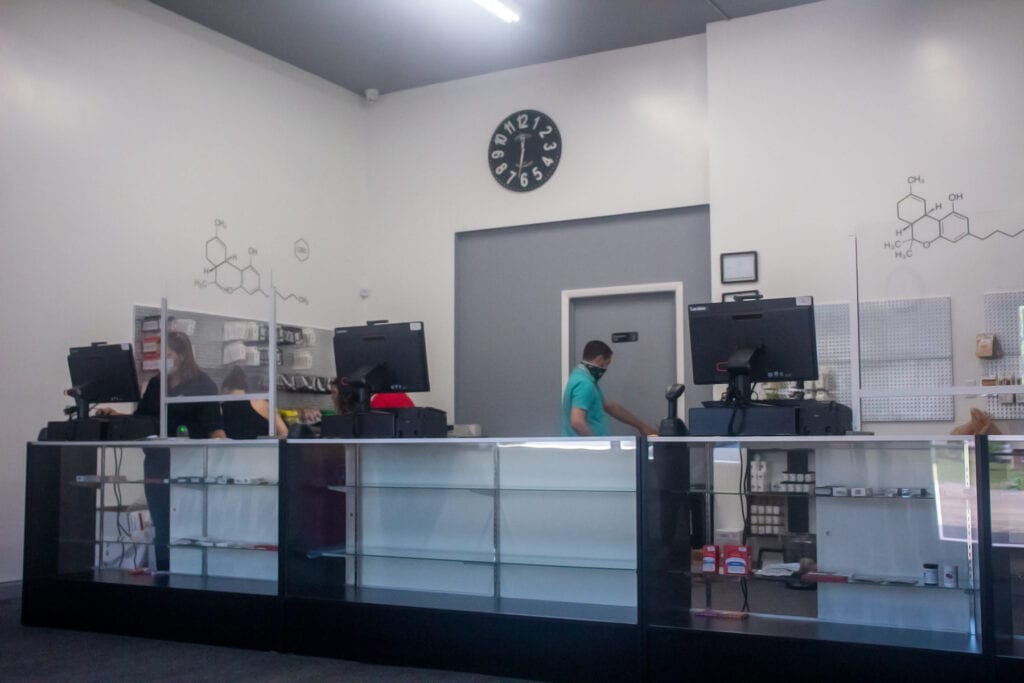 After coming into the lobby, clients visiting Agri-Med, which is a new recreational and medical marijuana establishment that celebrated its soft-opening on Monday, are brought to the salesroom and connected with budtenders to find a product that best suits their needs. — DN Photo | Brandon Schreur

Agri-Med first opened in Muskegon a little over a year ago, with the company just recently having celebrated their one-year “canniversary.” Their shop in Nunica, which is located approximately nine miles east of Grand Haven, opened a few months later.

To celebrate coming to Edmore, Agri-Med is holding a ribbon-cutting ceremony at 11 a.m. Thursday. The public is welcome to attend.

“I’m having T-shirts made that we’ll be handing out, some goodie-bags and a few specials,” Powers said. “We’re going to offer a first-time customer discount, as well as senior and veteran discounts. The Edmore Village Council will be coming (on Thursday), I believe. We did have a whole group of them come down on Friday to do a tour. They had lots of questions, but I think they were impressed and pleased to see some investment in the town.”

“With the tax dollars and application fees, they’ll get some benefit out of us, as well as the increased traffic,” she continued, noting that Agri-Med also frequently invests in the cities and villages that they open in. “People will come and then stop to get some ice cream, use the gas station and eat at the pizza place. Hopefully, this brings some fresh revenue to all places.”

Agri-Med’s Edmore location is open 10 a.m. through 7 p.m. Mondays through Wednesdays, 10 a.m. to 9 p.m. Thursdays through Saturdays and 11 a.m. to 6 p.m. Sundays. The provisionary is open for both in-person sales and curbside pick-up at this time.