Brendan Kennedy cashed in a bold bet he made on cannabis a decade ago after his Tilray Inc. merged with Canadian rival Aphria Inc. in an industry-shaking $5-billion deal on Wednesday.

That wager was made in May 2010 when Kennedy first caught wind of the cannabis industry’s potential during a stint working at a San Francisco-based venture capital firm. Fast forward 10 years and Tilray – a company he co-founded with Michael Blue and Christiah Groh – will now command a market-leading position in Canada with a solid foundation to take over a fair stake in Europe’s burgeoning medical cannabis market.

“Had we predicted any of that in 2010, people would have thought we were crazy. Or at least wrong,” Kennedy told BNN Bloomberg in a phone interview. “And there’s a satisfaction today in showing just how right we were.”

It’s the result of an 11-month-long courtship between the two companies that began when Kennedy and Aphria boss Irwin Simon spoke on the same panel at a Florida investor conference. A few more meetings took place in Toronto and New York before COVID-19 relegated negotiations to Zoom calls and text messages, Kennedy said.

“I went to bed closing the deal around 2 a.m., and work up for my next meeting at 3:45 a.m. before the announcement,” he said, noting he expects the deal to close sometime by the second quarter of next year.

And while becoming a pot seller in the U.S. remains a sharp focus, the new Tilray will have a presence in the world’s biggest consumer market through its hemp food and craft brewing subsidiaries.

One intriguing part of this deal is how the new Tilray could use craft brewery Sweetwater Brewing Co., which it bought last month with beer giant Anheuser-Busch InBev SA, to make pot drinks for the Canadian market. Those conversations will begin to happen, Kennedy adds. Tilray and the Budweiser-maker struck a partnership in late 2018

But as Kennedy takes a step back from day-to-day management of Tilray in return for a seat on the merged company’s board, he expects to rest for a short while before pursuing another venture outside of the pot space.

“Before I did this I used to do Ironman triathlons, and I’ve got a few more of those in me,” he said. “Tilray, depending on how you look at it, was my seventh or eighth startup. That’s in my DNA. I like early-stage investing. I don’t know what the future looks like but we’ll see if I can resist the desire to start something new.”

As first reported by BNN Bloomberg, Tilray and Aphria confirmed Wednesday that they plan to merge in a $5-billion all-stock blockbuster. The new company will be referred to as Tilray, while Aphria shareholders will control 62 per cent of the company’s equity. Aphria will control seven of the new company’s nine board seats. The new company will have combined revenue of $874 million and will aim for $100 million in annual cost savings, which they hope will provide “a robust platform for future profitability.” Future M&A deals are expected to accelerate in the wake of the blockbuster. Meanwhile, Bloomberg Opinion columnist Tara Lachapelle says the merger is a wager on the “cannabis lifestyle” becoming enmeshed in U.S. culture and industry.

Aleafia Health struck a coverage deal with Unifor, Canada’s largest union, on Friday to be the organization’s preferred supplier of medical cannabis to its members. Unifor, which has about 315,000 members, will see increased access to Aleafia’s medical cannabis as part of their benefit and insurance coverage. Terms of the arrangement were not immediately available. Earlier in December, Aleafia announced it would begin producing strains developed by Robes Cannabis and Drake-producer, Noah “40” Shebib, including Afghani Bullrider and Wedding Cake, two highly sought-after cultivars for medical usage.

Ottawa-based cannabis producer Hexo reported a nine-per-cent sequential rise in first-quarter revenue to $29.5 million, while posting a $4.1 million net loss on Monday. The company improved its adjusted EBITDA as well as lowering costs in the quarter which helped to showcase stronger profitability relative to analyst expectations. RBC Capital Markets analyst Douglas Miehm said in a note that Hexo remains on track to achieve positive EBITDA sometime in the first-half of 2021. The company has is in the top four Canadian cannabis companies by market share, he added.

Canadians bought $270 million in cannabis in October, a 5.1-per-cent increase from the prior month as more Ontario stores boosted sales. Statistics Canada said Ontario’s monthly sales reached $83.9 million in the month and led all provinces with a 7.9-per-cent gain. Canada’s legal recreational pot industry currently operates at an annual run rate of about $3.24 billion, and should reach about $4.5 billion in 2021, according to Stifel analyst Andrew Carter.

BMO Capital Markets analyst Tamy Chen downgraded Aurora to an “underperform” rating but increased her 12-month share price target to $9 from $7. Chen notes that Aurora has improved its balance sheet, which could improve its long-term valuation but cautions that its attempt at a turnaround may not be successful. Aurora made headlines this week, announcing 214 further layoffs as a result of reducing growing capacity at its Aurora Sky facility to 25 per cent. Chen thinks shutting the Sky plant entirely and focusing on its MedRelief indoor facility would improve margins for Aurora.

CANNABIS SPOT PRICE: $6.20 per gram — This week’s price is up 1.7 per cent from the prior week, according to the Cannabis Benchmark’s Canada Cannabis Spot Index​. This equates to US$2,207 per pound at current exchange rates.

Scheduling note: Cannabis Canada Weekly will be on hiatus beginning next week and will return Saturday, January 9. Happy Holidays! 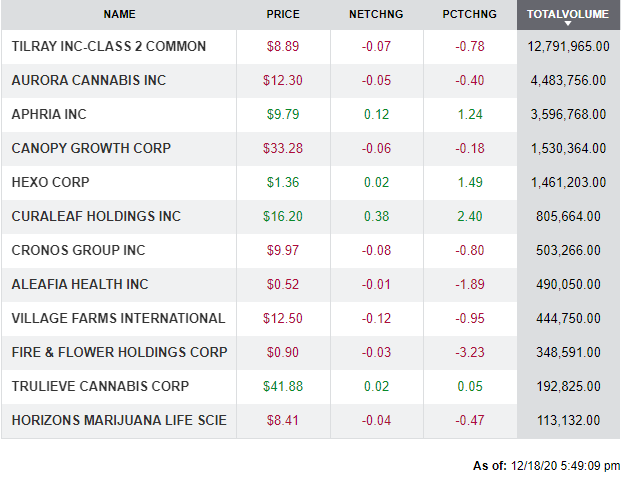 Cannabis Canada is BNN Bloomberg’s in-depth series exploring the ongoing growth of the Canadian recreational cannabis industry. Read more here and subscribe to our Cannabis Canada newsletter to have the latest news delivered directly to your inbox every week.