NASDAQ:APHA has been one of several cannabis stocks that have taken off since late in 2020 when it was announced that President-elect Biden had won the federal election. On Friday, as the markets prepared for an extended weekend, Aphria added 0.36% during the trading session to close the day at $16.94. The stock peaked earlier this week, setting a new 52-week high of $32.29 before a sector selloff on Thursday brought Aphria down to its current price levels. The Ontario-based company has still returned over 290% to investors during the past 52-weeks, although much of that has come during the recent rally in February.

That rally and subsequent selloff were fueled in part by the cannabis sector being the latest investing target of Reddit investors. Aphria rivals like Tilray (NASDAQ:TLRY), Aurora Cannabis (NYSE:ACB), and FinTwit favorite Sundial Growers (NASDAQ:SNDL) all had volatile weeks. Tilray suffered one of the largest drop-offs as shares were trading for $67.00 on Wednesday, but finished the week on Friday at $29.00, a loss of nearly 60% over two trading days. 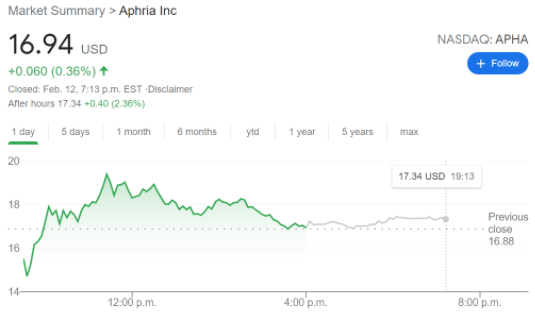 While investors await what seems like an inevitable loosening of federal legislation surrounding cannabis as a Schedule I drug, Canadian stocks like Aphria, may not be a direct beneficiary of legalization. With more states joining the fight to legalize marijuana, including New York which is expected to be at some point in 2021, it is easy to see why investors are getting excited about stocks in this industry.