The HUB is rundown of the stories people in Boston are talking about. Patch publishes the HUB every weekday.

Good morning, Boston! It’s Wednesday, March 24. We’re trying to make sense of the mixed messages we’re getting on the fight against the coronavirus, as well as the nearly 2,000 plastic pink flamingos that popped up in the Seaport this week.

Like this newsletter? Get it every weekday morning by subscribing to Boston Patch. It’s free!

Gov. Baker On The Hot Seat

Massachusetts Gov. Charlie Baker spent most of his 45-minute appearance before a hearing of the Joint Committee on COVID-19 and Emergency Preparedness and Management defending his administrations handling of the coronavirus vaccine distribution effort. As of Tuesday, more than 1.9 million Massachusetts residents had received at least one dose of the vaccine.

Baker, according to the Boston Globe, told the panel the state had followed CDC and FEMA guidance on distributing the vaccine.

“The fact is that COVID – and the vaccines developed to prevent it – present very unique challenges that forced us to make adjustments,” Baker said. “The extremely limited supply, the need for cold and ultracold storage, the prep process, the potential for spoilage and the two-dose regimen were all on the ground realities that required a different playbook than the one that was developed to battle an outbreak using a traditional, understood, and widely available antibiotic.”

While less critical than when Baker first appeared before the committee on Feb. 25, lawmakers still peppered Baker with questions after he delivered his prepared remarks.

CommonWealth argues that’s enough evidence for state lawmakers to rethink the 2017 law and the portion that allows local governments to skim up to three percent of gross sales to cover increased municipal costs that had been anticipated but never materialized.

Signs of light at the end of the tunnel: Regal Cinemas, which owns 10 theaters in Massachusetts, is reopening next month….Sites are being considered for vaccination clinics as more of the medicine become available….The state released guidelines for high school graduations, most of which were postponed and scaled down in 2020.

A flock of 1,900 pink flamingos greeted commuters in the Seaport Monday morning. The plastic birds were set up Sunday night as part of an art installation that will be on display through March 30, WBZ reports. After that, 1,400 flamingos will head to The Street Chestnut Hill and 1,100 will be installed at MarketStreet Lynnfield.

Boston school officials are asking the state for a delay to bring students back to school full-time. The Boston Globe reports the school district still hopes to have students back in schools during the month during April, but wants an extension on the state’s April 5 deadline to bring back elementary students.

For information on getting a coronavirus vaccine in Massachusetts, visit Patch’s information hub.

What’s On Tap For Wednesday 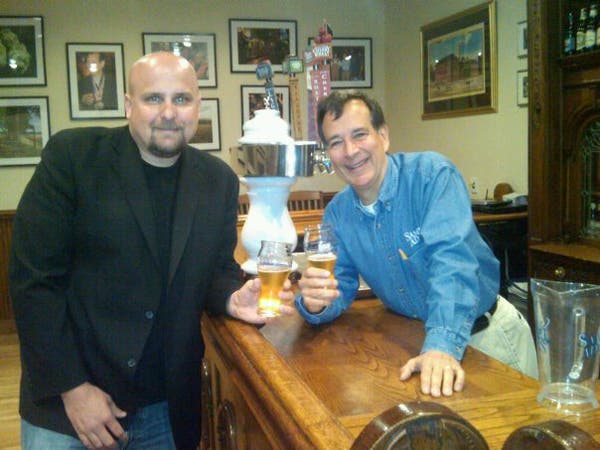 The author of this article has a beer with Boston Beer Co. founder Jim Koch in April 2010. (Dave Copeland/Patch)

Boston Beer Co. reopens its Sam Adams taproom at 2 p.m. Wednesday. The taproom was open for less than seven months before the coronavirus forced its closure last July. Boston Beer is also unveiling a new advertising slogan for its flagship brand in time for the upcoming Red Sox season: “This is Boston. Drink accordingly.”

It was nice while it lasted, but the unseasonably warm and dry weather over the past several days gives way to rain with a high of 61 degrees today. Warmer weather and some sun returns to the area on Thursday.

Dave Copeland is Patch’s regional editor for Massachusetts, New Hampshire and Rhode Island and is filling in for Mike Carraggi as curator of the HUB this week. Mike will return later this week.