Investors are excited with hopes of U.S. cannabis federal legalization rising again. Democratic control of the White House is good news for the marijuana industry. Most U.S. states have understood the importance of the amount of tax revenue the cannabis sector can bring in. Hence, some of these states voted in support of their legalization programs in the November elections.

Market optimism around U.S. federal legalization has also helped the industry bloom. Marijuana sales skyrocketed last year and so did revenue of U.S. cannabis companies. The outstanding performance is continuing this year as well.

Among them is Illinois-based Green Thumb Industries (OTC:GTBIF), which had a killer fiscal 2020 fourth quarter. It had triple-digit revenue growth on a year-over-year basis, with another quarter of positive EBITDA (earnings before income, tax, depreciation, and amortization). Management is hopeful about the company’s prospects for 2021. Over the last 12 months, Green Thumb stock has soared more than 400%, wildly outperforming industry benchmark Horizons Marijuana Life Sciences ETF, which gained 122%. Let’s review the Q4 results to determine where the company is headed this year. 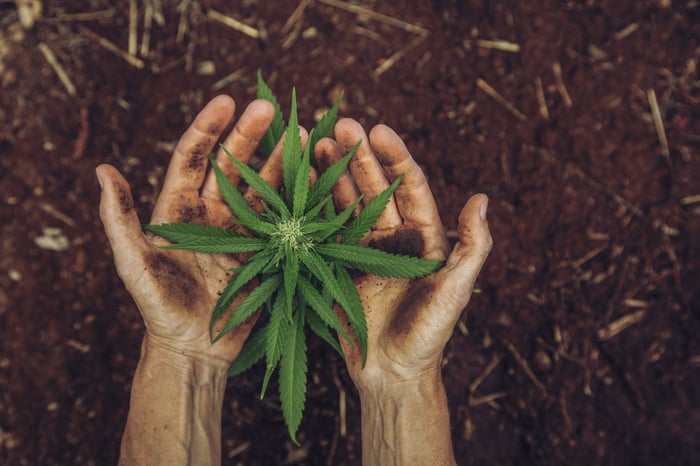 Revenue soared the “old-fashioned way” amid the pandemic

Its two segments — consumer packaged goods (medical and recreational cannabis products) and retail — made good progress in the quarter.

What’s impressive is despite limited M&A activity, the company’s 2020 revenue soared the “old-fashioned way” — producing and selling more without depending on any mergers and acquisitions to bring in revenue. according to management. Green Thumb produced and sold more in fiscal 2020; the huge demand for cannabis amid the pandemic made it possible.

The top-line increase and control on operating expenses drove another quarter of positive EBITDA. It rang in at $61.3 million, compared to $7.8 million in the year-ago period. That’s an impressive increase, most of which can be attributed to the dip in total SG&A (selling, general, and administrative) expenses, which came in at 30% of revenue versus 62% in Q4 2019 as economies of scale kicked in with revenue growth. Based on generally accepted accounting principles (GAAP), the company also reported net income of $22.5 million, or $0.11 per share.

Illinois cannabis market has huge potential for the company

Much of the credit for the sky-high revenue can be given to Green Thumb’s ability to expand amid the pandemic. The company took advantage of its home market — the new recreational cannabis market in Illinois. The state had legalized recreational (or adult-use) marijuana on Jan. 1, 2020, and witnessed sales of $40 million that month for that segment, eventually, jumping to $87 million by December. For the whole of 2020, Illinois sold more than $669 million worth of adult-use marijuana, with total legal cannabis sales crossing $1 billion.

Green Thumb’s management is obviously happy with Illinois’ progress. In the Q4 earnings call, CEO Ben Kovler said that “Illinois is just starting.” It seems just about right. In just the first two months of 2021, the state has generated $170 million in sales.  At this rate, there is no doubt Illinois will break 2020 records. Illinois being its home state gives Green Thumb a competitive advantage to strike while the iron is hot. The company is also bringing California’s No. 1 cannabis beverage, Cann, to the Illinois market by this spring and plans to expand this product into the New Jersey market, which recently legalized recreational cannabis.

However, giving tough competition to Green Thumb in the state is Cresco Labs, which has 10 retail stores in Illinois. The company is rapidly expanding to become the market leader. Currently, it operates in nine U.S. states, holding licenses for 15 production facilities and 29 retail outlets.

Being listed on the major stock exchanges like NASDAQ and NYSE is every U.S. cannabis firms’ dream. This will allow more retail investors to invest in the stock, boosting stock performance. Green Thumb has already taken its first step toward this dream. In February, the company registered its first public stock offering with the U.S. Securities and Exchange Commission (SEC) to raise $100 million. Soon after, it also received an offer from an institutional investor to buy around 3.1 million shares.

Kovler said, “This is an important milestone, and we view this one step closer to listing on a major U.S. exchange, giving equal footing for our Canadian peers”.

It will allow the U.S. cannabis stocks to trade on the major exchanges. Decriminilization will loosen criminal penalties for possession of a small amount of marijuana for personal use. But production and sale will still remain illegal, which can only happen after federal legalization.

Green Thumb ended its Q4 with cash and cash equivalents of $83.8 million and total debt of $99.1 million, out of which the company needs to clear just $342 thousand within 12 months. That said, investors should also be aware of additional long-term operational lease obligations of $146 million. Lease obligations are what the company owes the lessor for leasing out production facilities and stores. Any challenge to clear these lease obligations could impact operations.

Rising revenue and profits will make it easier for the company to clear its debts. Green Thumb still holds licenses to 97 retail expansions, so imagine the hold it will have on the U.S. market once all the stores open. At the end of the quarter, the company had 51 retail stores in 10 states. 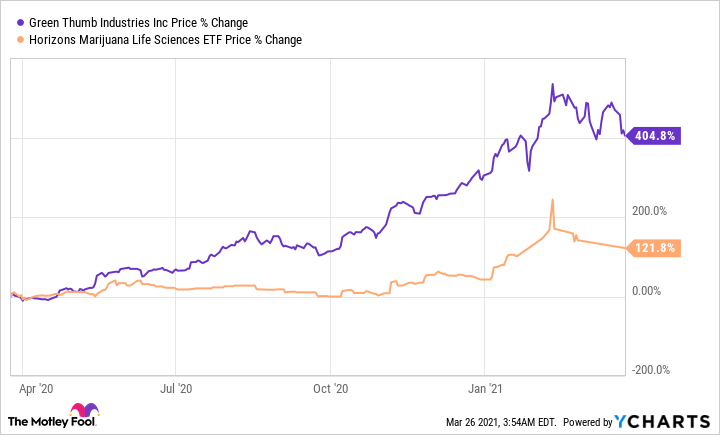 With an optimistic outlook for the year ahead, management stated, “Green Thumb is well-positioned. Our balance sheet is strong, our brands are connecting with consumers and our capital projects are on track. At the same time, we will maintain our focus on diligent execution and high-value capital expenditure allocation that will create sustainable value for all our stakeholders. The real fun is just beginning.”

If you believe in the potential of the thriving cannabis industry, this marijuana stock is the one for you to earn some fruitful long-term returns.

This article represents the opinion of the writer, who may disagree with the “official” recommendation position of a Motley Fool premium advisory service. We’re motley! Questioning an investing thesis — even one of our own — helps us all think critically about investing and make decisions that help us become smarter, happier, and richer.

Can marijuana bring about social equity? In Massachusetts, a case study

Albany may consider reparations for residents affected by marijuana laws