The connection between creatives and cannabis is long and storied — from the 19th-century hashish-smoking collective Club de Hachichins to the late comedian George Carlin to the ubiquitous hip-hop icon and unabashed marijuana ambassador Snoop Dogg.

Musicians, artists, and writers have long used marijuana as creative fuel. But is there a link between cannabis and creativity? If so, what precisely is the relationship?

“Everybody is trying to show that marijuana does everything,” says Dr. Alice Flaherty, an associate professor of neurology and psychiatry at Harvard Medical School who has written extensively about creativity and drug use. “If it was doing anything for creativity, people would be publishing it up the wazoo, and they’re just not.”

Clinical proof that cannabis influences creativity is scant. Whether there’s a connection hasn’t been studied enough, in part because there’s so little consensus on what constitutes creativity and how to measure it.

What researchers agree on is that creativity is spurred by what is known as “divergent thinking,” or the ability to think outside the box. Ten years ago, researchers at University College London set about studying the effects of smoking cannabis on creativity. They suggested that cannabis can promote the ability to connect unrelated concepts, an aspect of divergent thinking.

That is not unlike what Alexa Silverman, the pianist and band leader for the Rochester pop-jazz fusion band The Recall, describes experiencing when she uses cannabis. 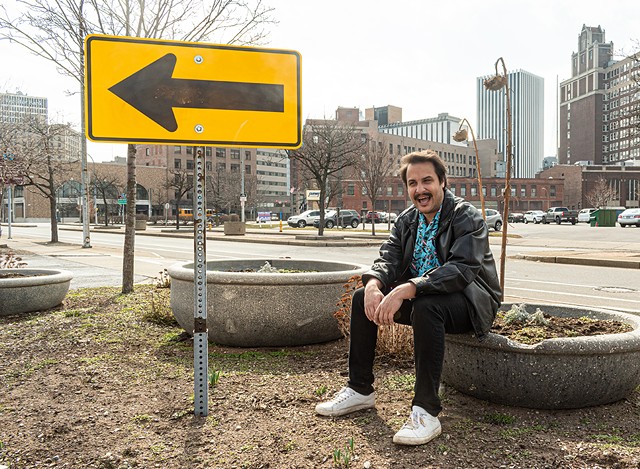 The drug, she says, keeps her from “overthinking” her music and enables her to experiment with more interesting chord progressions than she would if she were preoccupied with adhering to standard music theory rules.

“I feel like getting out of your head helps you become more creative, because you’re not paying attention to the rules,” Silverman says. “It helps you get out of that mindset of, ‘I need to be in this box, I need to do something a certain way.’”

What the University College London researchers concluded was that cannabis promotes the release of dopamine that can result in greater verbal fluency — in this case, the ability to rattle off as many words in a minute that began with a given letter.

This was particularly noticeable in research subjects who were deemed, by their own responses to a personal survey, to have “low creativity.” Cannabis had no effect on the “high creative” subjects, however. Researchers concluded that cannabis made “low creatives” less inhibited.

“This disinhibition may already be present in the high creativity group when not intoxicated and they may already be reaching maximum performance levels that do not change under the influence of cannabis,” the researchers wrote.

Siena Facciolo is a private music teacher and singer-songwriter who creates brooding piano ballads under the stage name Siena. Facciolo began using cannabis edibles back in December as a way to tap into what she calls a “flow state” — “the ability to, without barriers, express whatever’s inside of you.”

“The barrier might be self-criticism,” she explains, “but the barrier could also be feeling like your emotions are too big.”

Facciolo used to reach that state of mind through live performances and jamming with friends. But she says she turned to edibles when the pandemic limited her human interaction.

“I do use them to basically cut through the bullshit of everyday life and just kind of actually get in touch with myself better,” Facciolo says. “’Cause I feel like we’re often berated by obsessive thinking and critical thinking, and we’re always analyzing everything.”

Bassist Arjun Baxter, an Eastman School of Music graduate who works with Rochester acts such as the classically influenced folk duo The Archive Ravens and pop artist Grace Serene, knows about paralysis by analysis.

“When you talk about over-analysis, that’s a second that gets in the way of a nanosecond judgment you need to be making, in terms of a player on the spot,” Baxter says. “The faster you can [get in the mindset of] ‘I’m not thinking and I’m simply doing,’ it makes it a lot easier to get your fingers ready for playing those notes, especially right at that moment when you need it.”

Cannabis, he says, helps his improvisation and technical proficiency. Part of his daily routine is smoking sativa weed strains that he finds are conducive to productivity during the daytime.

“It keeps me incredibly driven, and I’m not overthinking things,” he says. “I’m going pretty instinctually.”

Baxter has played in the Rochester progressive rock band Kind of Kind, fronted by guitarist-vocalist Dan Sweeny, who credits cannabis with assisting in the writing of most of his group’s songs.

Sweeny applies the artistic prescription “write drunk, edit sober” — often incorrectly attributed to Ernest Hemingway — to his use of cannabis.

“When I’m high, I’m a lot less critical of the things that I write, and I’m more apt to just create for creation’s sake, and not to think so much about, ‘Oh, does this work? Does this not work?’” he says. “I’ll figure that out later.”

Flaherty, the Harvard professor, who explored writer’s block and what sparks the drive to write in her 2005 book, “The Midnight Disease,” says there is a theory that marijuana can make artists feel more creative because it causes them to lower their standards.

“There’s a Darwinism theory to creativity,” Flaherty says. “If you just make more shit then you increase the odds that something you make is going to be good by chance.”

TOO MUCH OF A ‘GOOD’ THING

A couple years before he hosted “The Daily Show,” comedian Jon Stewart interviewed George Carlin in 1997 and asked pointedly, “Was there ever any fear that, by giving up the drugs, you lose a bit of the genius?”

Carlin, who was an admitted drug addict earlier in his life, replied that he was using marijuana at the time perhaps once a month, but joked, “I have always, somewhere, a joint near me.”

“That has been a canard for some time, that most of this creativity comes from being wacky, and I’m sure there’s a lot of truth in that,” he said in answer to Stewart’s question. “Where the drugs are concerned, and alcohol, they do seem to open a window for you. They do seem to broaden the vistas — at first.”

But he warned against relying too heavily on cannabis, drawing parallels to great writers who became alcoholics. “I do find that, with judicious use, there’s some value in it,” he said. “But most of the things we use don’t let you leave them alone.”

A more recent study of a cannabis-creativity link out of the Leiden University Institute of Psychology in The Netherlands drew partly the same conclusion. In 2015, a group of researchers delivered low doses of tetrahydrocannabinol — the chemical in cannabis known as THC that alters the mind — and high doses of THC to two groups of volunteers.

One group was administered THC equivalent to about a half a joint, while the other got an amount similar to two joints.

“The frequently reported feeling of heightened creativity [among cannabis users] could be an illusion,” the researchers wrote. “In other words, smoking a joint may not be the best choice when in need of breaking the ‘writer’s block,’ or overcoming other artistic inhibitions, and smoking several of them might actually be counter-productive.”

Zach Dietl, 37, a Rochester painter and sculptor, may be a testament to that conclusion. He saw his creativity bloom when he stopped using cannabis recently.
He says he had lived a substance-free life into his 30s, but began using alcohol and pot after completing his graduate degree in fine arts to, as he put it, “question my earlier boundaries.” He says it was fun until he realized he was all play and no work.

“I found it seriously hampered my ability to focus and grind out artwork,” he says, adding that before long, he was working on his art only once every few months.
Occasionally, Dietl says, smoking weed helped him get over that self-critical hump confronting many artists.

“But more often than not, I was just stoned and not making work,” Dietl says. “As time went on this became more and more a problem where I spent too much free time high and procrastinating.”

Working sober hasn’t seemed to hamper his creativity. He’s currently working on a series of paintings of small woodland creatures arming themselves with human refuse, like squirrels holding weapons improvised out of silverware.
“Kind of like nature’s revenge,” he says.

There are, of course, legions of cannabis users who create nothing of note.
It is possible that creative people come by their talents naturally despite, not because of, their drug use. It is also possible that the process of creating is so mentally and physically taxing to some artists that they turn to cannabis to relieve stress.

Rochester painter and mixed media artist Jamie Lowes uses medically-prescribed marijuana to manage chronic pain stemming from a back injury he suffered as a younger man. But he acknowledges enjoying other benefits to using pot, namely, “putting you in a mindset where you’re able to be a creative force.” 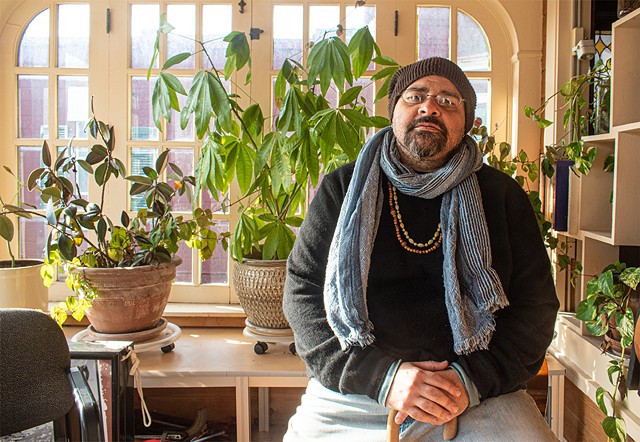 His work varies in style, but most paintings are moody washes of earthy colors, with line-heavy renderings of women’s faces and partial bodies emerging from the shifting hues. Others are of gnarled trees or architectural ruins, each with a fantastical vibe.

“Time disappears in the best way possible,” he says of using cannabis. “Almost purely for me, almost purely, like the whole rest of the world literally would disappear. I can start painting at 10 o’clock and before I know it, it’s four o’clock in the morning.”

For Rochester-based artist Okemini Kalu, who goes by the name Prince O., smoking marijuana gives his voice what he calls a “coarse, rugged” timbre that’s ideal for his dark, psychedelic-friendly club music sound. The calming effect, he says, is complementary to the euphoria he feels making music. 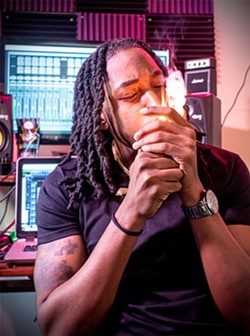 “What I take out of smoking cannabis is those moments of just being zoned out, in the moment, and that extreme focus that the herb gives,” Prince O. says.

Marijuana has been scientifically proven to relieve pain, produce a feeling of relaxation, increase appetite, slow the perception of time, induce laughter, and heighten sensory perception.

What it has not been scientifically proven to do is enhance creativity.

“I’ve seen a lot of marijuana use in artists who are patients and I’ve not seen any evidence of increased creativity other than in one guy who stopped using it,” Flaherty said.

“That patient got very creative after he stopped using,” she said. “But I also think he got manic because the marijuana was keeping him calm.”

Daniel J. Kushner is CITY’s arts editor and can be reached at dkushner@rochester-citynews.com.

Rebecca Rafferty is CITY’s life editor and can be reached at becca@rochester-citynews.com.

David Andreatta is CITY’s editor and can be reached at dandreatta@rochester-citynews.com.